The medieval toilet seat once belonged to a tenement building near the banks of the River Fleet in London. Now a subterranean river that flows into the Thames, the Fleet was once a significant body of water in the U.K. capital. 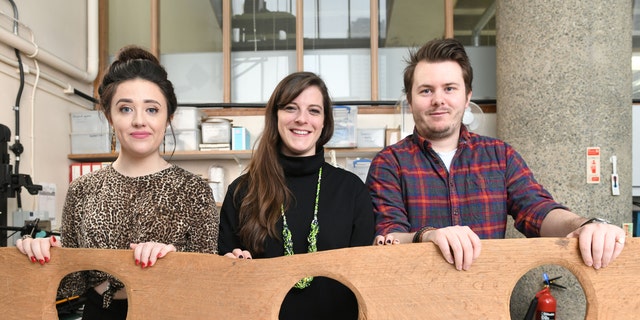 Museum of London staff Maddie Hammond, Emily Brazee and Tom Kelly pictured with a replica of a 12th century triple toilet seat, before it goes on display as part of the Secret Rivers exhibition. (Matt Crossick/PA Wire)
Part of an exhibition entitled "Secret Rivers," the toilet seat is one of a host of artifacts retrieved from London’s river sites — swords, spearheads and battleaxes from the Bronze Age to the medieval era.
The weapons were likely thrown the Thames and its tributaries as personal votive offerings, possibly in an attempt to control the waters, according to the Museum. “The swords are in good condition, indicating that they were high-value items placed deliberately in rivers for this purpose,” it said, in a statement.
“For thousands of years people have lived alongside the rivers of London. These waters were vital for everyday life but they also played an important spiritual role,” said Kate Sumnall, curator of archaeology at the Museum of London, in the statement. “The archaeology of the rivers is fascinating; a wealth of objects that give tantalising glimpses into the past.”
The "Secret Rivers" exhibition will run from May 24 to Oct. 27, 2019. 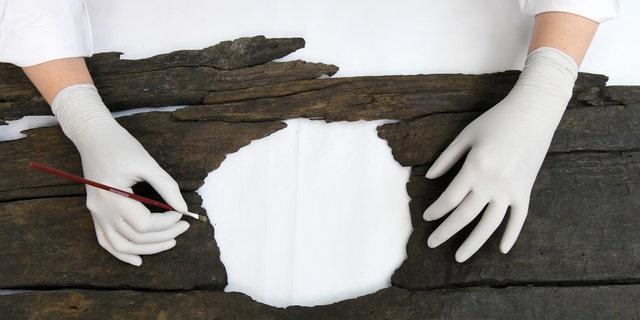 Conservator Luisa Duarte works on the triple toilet seat. (Matt Crossick/PA Wire)
London continues to offer fascinating glimpses into its rich history. The long-lost remains of Captain Matthew Flinders, the explorer credited with giving Australia its name, were recently discovered in the city.
Experts uncovered the grave of the celebrated Royal Navy captain as part of an archaeological dig prior to construction work for the HS2 high-speed railway project. Flinders’ remains were found in St. James’ burial ground near Euston Station in Central London.
source: https://www.foxnews.com/science/bizarre-medieval-triple-toilet-seat-revealed
by James Rogers
http://www.thisoldtoilet.com