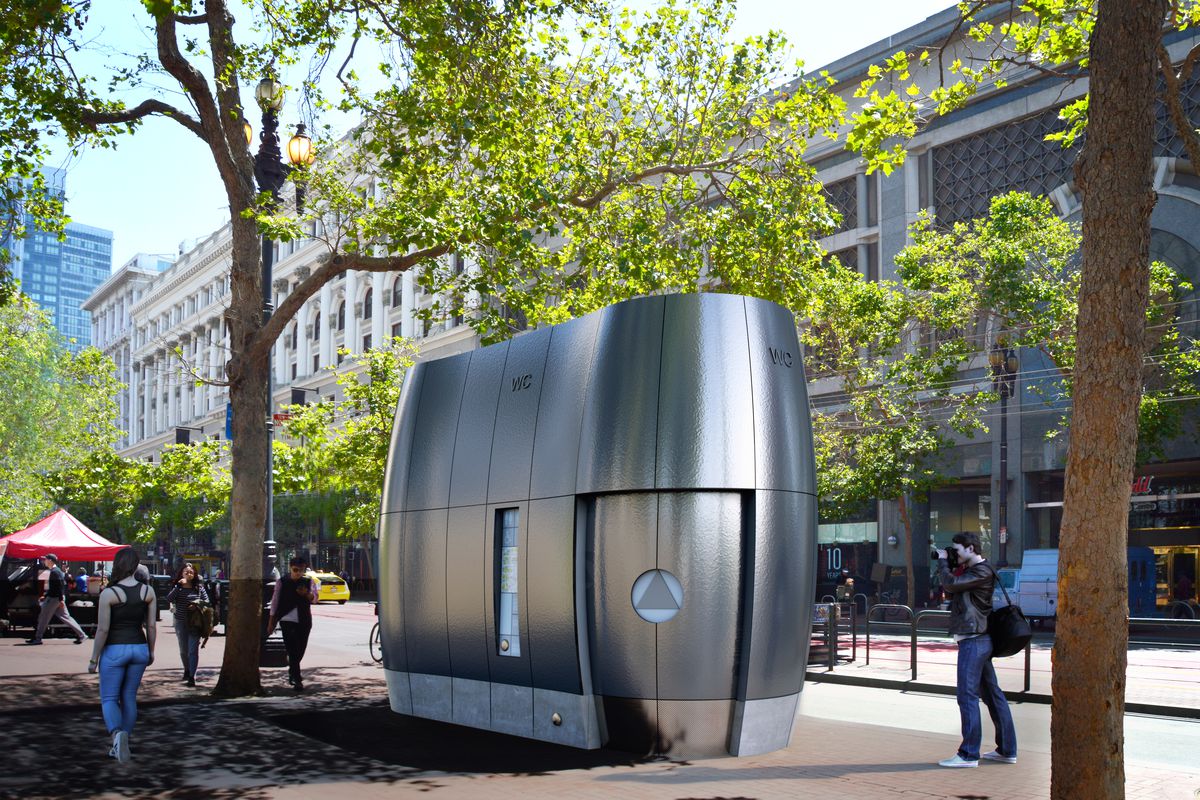 Rendering courtesy of JCDecaux
Smith Group’s winning design.
Designed by Detroit-based SmithGroup, these gleaming and curvy new toilets and kiosks will soon grace the streets of San Francisco, replacing the faux-Parisian loos and newsstands that have been lingering around—and degrading—since 1996.
In partnership with outdoor furniture company JCDecaux, SmithGroup won the contract over two other firms, MIN Design and Branch Creative, selected by the city’s Civic Design Review and Architectural Review committees.
The agreement covers 25 public toilets and up to 114 kiosks, which will rollout in the summer of 2021.
According to JCDecaux, 70 of the new kiosks will come with digital displays, 20 of them will offer a multi-service space dedicated to small businesses and neighborhood services, and 15 kiosks will feature interactive screens for civic information.
What’s more, 11 out the 25 new
What’s more, 11 out the 25 new
automatic public toilets will be supervised by paid attendants as part of the city’s Pit Stopprogram, a workforce development effort that pairs people in need to job reentry with a much-needed service. Prior to the Pit Stop program, San Francisco’s public toilets were infamous for being less than savory affairs.
Supervised toilet locations open as early as 7 a.m. and close as late as 8 p.m., but all of them have different schedules. A Pit Stop toilet can cost anywhere between $170,000 and $205,000 a year to operate.
Initially, the new toilets were to come crowned with concealed planter boxes to give them a green element. But, mercifully, that design was scrapped after the city’s Arts Commission and Historic Preservation Commission intervened, slamming the look as an aesthetic and maintenance nightmare.
San Francisco’s automatic public toilets recorded over 850,000 flushes in the last 12 months.
source: https://sf.curbed.com/2019/8/19/20812408/sf-new-toilets-kiosks-design-plan-bathrooms
By Brock Keeling
https://www.thisoldtoilet.com
Posted by This Old Toilet at 7:00 AM No comments: 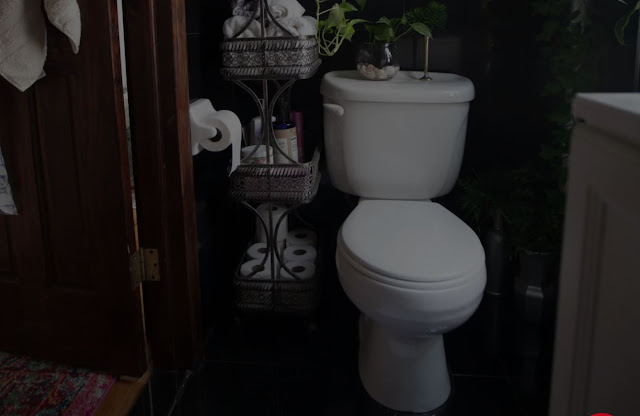 There’s a common bathroom argument that never fails to rile me up: The issue of whether you should leave the toilet seat up or down after you go (yes, I have a lot opinions on bathroom stuff).
Traditional gender “rules” imply that men leave the seat up because they pee with the seat up, while women leave the seat down for their own bathroom-going reasons. It’s caused many spirited debates in my life, online, and in TV shows and movies. Gender presentation and identity issues aside, I have a problem with this whole argument, and it’s that it’s entirely moot. You know why? Because we should all just shut the toilet lid completely after going to the bathroom. Forget the seat!
If there’s a lid on the toilet (more on that in a minute), then the best thing to do is to shut the lid before flushing. Not only does this shut the book on the seat argument (because closing the lid thereby folds down the seat), it also is more hygienic. Thanks to a lovely-sounding phenomenon called “toilet plume,” a flushing toilet easily spreads fecal matter to the surrounding area, which is particularly bad if you’re sick and using the toilet. Those germy particles can reach a height of 2.7 feet, and even if they’re not the kind of germs that’ll get you sick, they’re also not exactly what you want coating your toothbrush.
Beyond that (*takes off lab coat*), closing the toilet lid whenever it’s not in use is just a smart idea. An open body of water in the bathroom is just begging you to drop in your phone, keys, wallet, or any other toiletries you have hovering nearby. As a clumsy person whose toilet is snuggled right up next to a shelf, I’m always gently (or not so gently) reminding visitors to please shut the lid, lest they have to play a too-literal and not-fun real-life version of Go Fish for Terri’s hairbrush or Sarah’s phone.
This is all, of course, if there is a lid at all. Many public restrooms and some homes and private spaces don’t have a lid. If you live with other people and have no lid, have a conversation about toilet seat expectations before you get into a passive-aggressive war of up vs. down. Outside the home, what you do with the seat is up to you, but keep this in mind: defaulting to putting the seat down means fewer people have the possibility of unwittingly parking their butt right on the rim. And come on, who wants that?
source: https://www.apartmenttherapy.com/closed-toilet-lid-reasons-36635405
by Terri Pous
http://www.thisoldtoilet.com
Posted by This Old Toilet at 7:00 AM No comments:

Sometimes, the weather stinks.
A South Florida homeowner suffered a rare weather-related mishap on Sunday. Scattered afternoon thunderstorms had bubbled up near the Port Charlotte home, but nothing seemed too out of the ordinary. Then came a flash of light and a deafening crack, and a toilet lay in ruins.
“This is probably the first time in history something like this has happened,” said Jordan Hagadorn. He owns A-1 Affordable Plumbing, the company that responded to the wrecked restroom in the Gulf Cove neighborhood. “We had no idea what we were getting ourselves into.”
Hagadorn says that lightning struck the yard outside the Gulf Cove home, somehow achieving “perfect ignition inside the sewer."
“It must have exploded the methane inside. The homeowner was home at the time. There was a loud bang when the lightning struck.”
The charge traveled through the home, damaging electrical outlets and destroying wiring. The bathroom blast, however, was enough to shatter the toilet and even take out windows. There was even some burning reported. Smoke also was seen outside originating from the septic tank. Fortunately, the storm dumped briefly heavy rain, which extinguished any fledgling flames.
“It’s almost like winning the lottery,” explained Hagadorn regarding the odds of such an occurrence.
“Me personally? I’ve never heard of that happening,” said Andrew McKauthan, a meteorologist at the National Weather Service in the Tampa area.
Porcelain pelted the walls, even denting/scratching the drywall.
“Thirty percent of the pipes in the home need to be replaced,” according to Hagadorn. “The lightning blasted a hole in the ground. There’s piping on the roof.” The photos he posted to Facebook show PVC piping split and splintered.

“I honestly thought the call was a friend messing with me until I showed up,” he said.
He was grateful no one was hurt in the bathroom explosion, as it could have been much worse.
The incident raises new concerns over the dangers of storming the bowl while it’s storming outside. The National Weather Service has recommendations in place for lightning safety, including bathing. So far, they have yet to weigh in on weather-related toilet safety, however.
In the meantime, Hagadorn is approaching the situation with humor, offering his own advice: “No more pooping while it’s storming outside.”
source: https://www.washingtonpost.com/weather/2019/08/08/florida-woman-suffers-freak-toilet-explosion-during-thunderstorm/
by Matthew Cappucci
http://www.thisoldtoilet.com
Posted by This Old Toilet at 8:00 AM No comments:

So, we wouldn’t exactly call the LumiLux Advanced 16-Color Motion Sensor LED Toilet Bowl Night Light a must-have gadget. As silly as it might seem though, thousands upon thousands of people absolutely adore this thing. It couldn’t be easier to install, and it automatically turns on in the dark when you open your toilet bowl lid. You can set it to glow in any one of 16 different colors, and it only costs $15 on Amazon.


Here are the highlights from the Amazon page:
source:
https://bgr.com/2019/08/02/toilet-light-amazon-sale-night-light/

http://www.thisoldtoilet.com
Posted by This Old Toilet at 3:24 PM No comments: