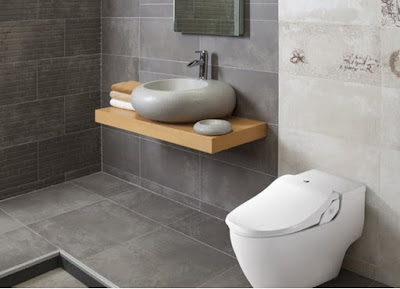 There’s no need to abdicate your crown — you simply need to replace your throne. Your porcelain throne, that is. If you’d like to spruce up one of the most essential rooms in your home, perhaps it’s time not for a new toilet, but simply a new toilet seat. And here to help is the Slim Two Smart Toilet Seat. Heralded as the ultimate bathroom upgrade by Bio Bidet, this new Kickstarter project is said to be a “cleaner, healthier, and more eco-friendly smart toilet seat.” If nothing else, you know you’re intrigued.

Think of it as a bidet in a toilet seat. But instead of having to buy a clip-on device to spray water at your rear, or replace your entire toilet with an expensive system, the Slim Two offers many of the same benefits but at a more affordable price. “The Slim Two is designed to bring a new level of quality, comfort, and cleanliness to your bathroom,” its Kickstarter page notes. With features like a heated seat, stainless steel construction, and even a night light to help you aim when you go in the dark, this may be the royal treatment you deserve.

In order to use the Slim Two, you’ll have to plug the entire contraption in (so if your toilet isn’t located near an outlet, you’re a bit out of luck). But should you be lucky enough to have a power source near your rear, the Slim Two can jump into action. There’s a retractable stainless steel nozzle to direct the spray, and that appears when you need it, and retracts when you don’t. There’s also a massage function that you can turn on and off using the control panel on the side of the toilet seat, as well as a Turbo function, that we assume is not for the faint of heart.

You can control the temperature of the water, as well as the temperature of the seat, and when you’re done, the Slim Two is said to be totally self-cleaning (though we’re not entirely sure of how that works). The Slim Two is also said to be DIY-friendly, which means you shouldn’t need to hire a plumber to install it. In fact, the Kickstarter page suggests that the seat and attachments will all work with your existing plumbing.
There still aren’t all that many details on exactly how the Slim Two will work, but if you’re interested enough in becoming an early backer, a pledge of $169 should get you a Slim Two seat. 
Mark Zuckerberg may be a billionaire but he's not above lugging around his toddler's potty training seat.
The Facebook founder was spotted in Hawaii on Thursday, carrying his daughter's training toilet and sippy cup after having lunch at casual burger joint Bubba's in the town Kapaa on Kauai. 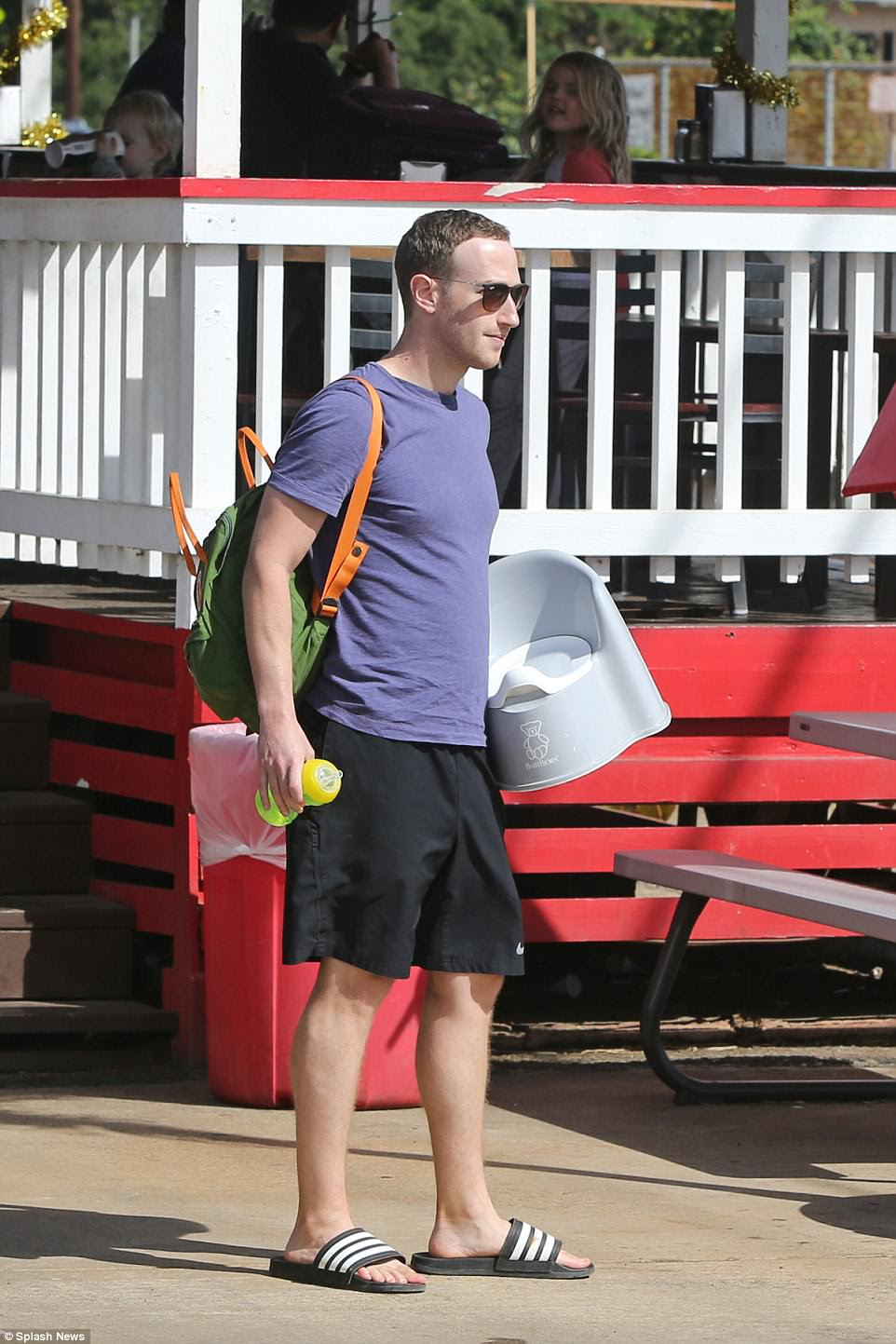 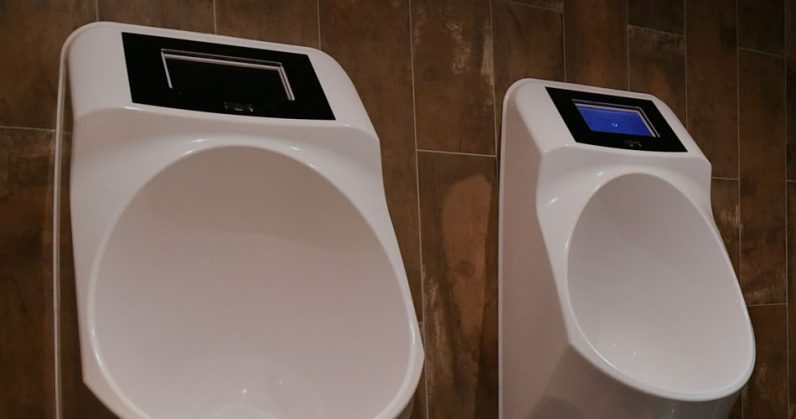 We’re not taking the piss on this one. Forward-thinking Dutch toilet startup, Mr.Friendly, has found a way to pester you with intrusive advertising even when you’re taking a leak.
The quirky company has designed a smart urinal that fills your sight with crappy ads while you’re emptying your tank. Indeed, the focus here is on the ‘while’ part. The unusual invention is equipped with built-in sensors that roll the ads only when they’ve detected someone is painting the canvas yellow.
The ads are then displayed on the urinal’s built-in display. As you probably guessed, Mr.Friendly has also built a “Cloud Control Center” that lets you manage the ads remotely, including the when they appear. 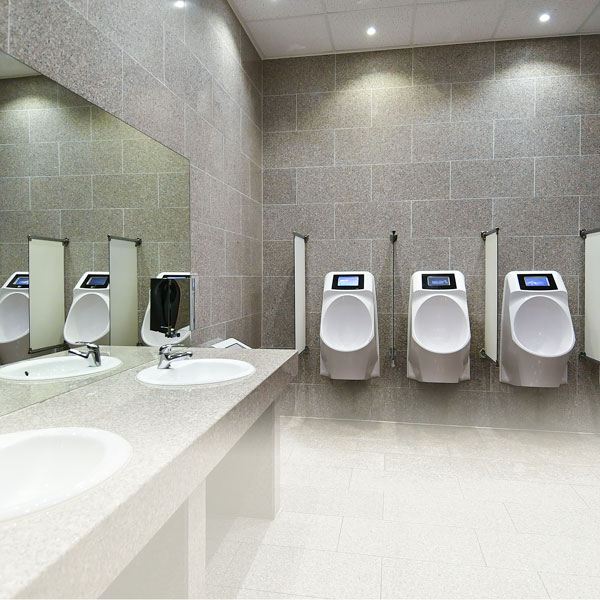 How, you might be thinking, is this a good idea?
Well, ads on urinals are “guaranteed to capture 40 seconds of a gentleman’s attention,” according to Mr.Friendly.
“Mr.Friendly understands the importance of finding a way to communicate when a person is most open to receiving information,” its site reads. “The best moment to do this is when a person cannot escape to do something else, and can only focus on your message.This happens seldom, especially in our busy modern world.”
In addition to the excellent advertising opportunity it offers, Mr.Friendly claims the urinal is “waterless and cost-effective.” It’s also entirely odorless. Unfortunately, the urinal’s price isn’t listed on the website.
Funny enough, I heard about Mr.Friendly and its bleeding-edge creation from a colleague who spotted one of these in the wild. In signature Internet of Things fashion, the advertising component – which is Mr.Friendly’s unique selling point – wasn’t working.
In all fairness, toilet tech is a legitimate industry and nothing to be frowned upon. You’ve probably heard about Japan’s excellent toilets – or perhaps seen this hi-tech urinal that cleans your bishop entirely hands-free.
Unlike Mr.Friendly’s urinal though, these were designed with functionality in mind, not advertising.
So unless the Mr.Friendly urinal can balance out the outrage of serving ads on such an uncommon occasion with a wonderful pissing experience, we might as well flush this concept down the toilet.
source: https://thenextweb.com/shareables/2017/12/07/smart-urinal-ads-toilet/
by mix


Posted by This Old Toilet at 7:00 AM No comments:

North Carolina could one day be known as the birthplace of a futuristic toilet that can convert human waste into water, a puff of smoke and a dusting of ashes.
Scientists at RTI International and Duke University have been developing a high-tech off-the-grid commode for five years, with about $18 million in funding to date from the Bill & Melinda Gates Foundation. The Seattle foundation regards the lack of proper toilets as a major global health issue in many parts of the world, where water contamination and diseases are spread by more than 2 billion people using improperly drained latrines or defecating in open areas.
The idea of a germ-free toilet that can go anywhere is generating interest beyond the international aid network. RTI has begun testing a heavy-duty version of its sustainable toilet for military use. The testing is taking place at RTI’s headquarters in Research Triangle Park. The next step – installing the facility for testing at a military base – is under discussion and could happen as early as next year. The U.S. Army is interested in developing a mobile self-contained toilet that doesn’t depend on tanker trucks hauling out human waste in dangerous locations around the world.
If widely adopted, the remote, unplugged toilet could someday replace the low-tech Porta-Potty and serve residents in areas hit by disasters such as hurricanes, or be used by refugees, migrant workers, construction crews, festival goers and the like.
“When you flush, it doesn’t go to a sewer or a treatment facility,” said Jeff Piascik, a senior research engineer at RTI. “We treat that incoming source – both solid and liquid – to the point where it’s pathogen-free, it’s safe for the environment, and we’re able to treat everything on site.”
The most delicate of subjects in polite society, the standard toilet is a technological marvel of odorless sanitation that has changed society hugely, but has itself changed little since it was developed more than a century ago. If the toilet revolution is to happen, however, it would require more than technological advancements.
The researchers are finding that public acceptance of an off-the-grid toilet would also require an adjustment in cultural attitudes and taboos relating to privacy and hygiene.
“It’s usually not something you put in your backyard, for one,” said Brian Stoner, director of Duke’s Center for WaSH-AID (Water, Sanitation, Hygiene and Infectious Disease). “Now bring that closer to your home, and people can be uncomfortable with it, if it’s not presented properly.”
Stoner, who joined Duke’s faculty last year, spent 17 years at RTI, specializing in global health technologies. A prototype of the Duke/RTI toilet has been field-tested at a university in India for the past two years. Two more of the self-contained toilets will begin testing next year at a dormitory for women workers at a cotton mill in India, and at a community restroom in a low-income township in South Africa.
Duke and RTI, including N.C. State University’s Global WaSH Cluster, are working on the toilet with Colorado State University’s Engines and Energy Laboratory, NASA’s Ames Research Center, the U.S. Naval Research Laboratory and Connecticut start-up Biomass Controls, which last month opened an office in Durham.
The Gates Foundation has invested more than $100 million in its global Reinvent the Toilet project, which has resulted in a dozen toilet concepts since the foundation launched the effort in 2011. The foundation’s goal is to create a toilet that removes germs from human waste, recovers energy and other resources, operates independently of utility infrastructure, and costs less than 5 cents per day per user.
Some toilets have been developed in the past can do some of those things – like composting or incinerating – but they don’t meet all of the foundation’s criteria for cost, off-grid capacity, and pathogen-free operation.
Gates Foundation spokeswoman Allison Davis said the Duke/RTI toilet is one of the program’s successes and shows promise for commercialization. The other toilets are being developed in Europe, Asia, United Kingdom, Canada as well as the United States. Some turn the waste into chemical fertilizer or into biochar, a byproduct that can be used to amend the soil.
Rather than functioning as a terminal end of a vast sewer network, the RTI/Duke toilet is a self-contained and a self-sufficient waste-to-energy conversion machine. Freed from the sludge pit and untethered from the sewer pipe, it is a mobile, self-cleaning unit that contains a chemical waste treatment processor to purify urine into water, and a dehydrator and incinerator to reduce solids to ashes.
It goes by the name TOWR, short for Toilet with On-site Waste Remediation.
The treated water it produces circulates internally for flushing. Rather than using chemicals, it converts natural salts electrochemically into chlorine and other oxidants. A charcoal filter traps offensive smells in the smoke it releases when incinerating dried sludge. The mini-plant’s electronic technology can be powered by a wall outlet or solar panels.
The technology is not without limitations. It can only handle about 15 users in one day before it shuts down so as not to be overloaded with too much waste material. But Stoner said the technology could be scaled to accommodate 150 users.
Commercial production is at least two years off, Stoner said. He noted that adoption by the U.S. Army would go a long way toward validating the concept.
“It’s really changing the way we’re thinking about waste treatment,” he said.