Replacement Toilet Lids and Seats - Have you ever dropped your phone in the toilet? Stuff happens. - This Old Toilet 800-658-4521 It can happen for any variety of reasons. Maybe you're cleaning your bathroom and accidentally bump your phone off the counter. Perhaps you were listening to music in the shower and it falls out of your slippery hands while you're getting out. Maybe you were doing something else and it just met its fate.
No matter how it happens, it's not all that uncommon for people to drop their phones in the toilet. Yeah, it may sound gross, but if you have a smartphone and take it into the bathroom with you, you're opening the risk of that happening.


http://www.thisoldtoilet.com
Posted by This Old Toilet at 6:00 AM No comments:

Paula Stanton of New Jersey was heartbroken nine years ago when she lost a diamond ring she was given for her 20th wedding anniversary.
She’d accidentally flushed it down the toilet, and, at least usually, what goes down does not come back up in those scenarios.
But there is, apparently, an exception to every rule.
According to The Press of Atlantic City newspaper, when Stanton and her husband, Michael, returned from visiting their son for Thanksgiving, they had a letter from the public works department in Somers Point, NJ, where they live.
The letter was asking them to contact the department, for unspecified reasons.
When Stanton called, she reached Ted Gogol, a 20-year employee at the department. He told her he had found a ring in a sewer line near their house.
“I was only in a manhole less than 400 feet away from their house when I saw something shiny sitting in the mud and debris,” he told The Press. “I realized it was a ring, and I remembered the woman who was looking for a ring.”

Replacement Toilet Lids and Seats - Watch: This Toilet-Cleaning Robot Does the Dirty Work for You - This Old Toilet 800-658-4521

No one wants to spend more time cleaning, and that’s why robot vacuums have been hot items the last few years. But a new robot is set to make your life 100 times better, by doing the dirty work  — in the bathroom —for you.

Altan Robotech‘s Giddell Toilet Cleaning Robot (now available on Amazon for $500) is billed as the world’s first portable toilet-cleaning robot.
The battery-powered Giddell sits on top of the bowl (after raising all lids) and features a telescopic arm equipped with a brush and advanced sensors with “115 sophisticated, heavy-duty mechanisms” that let it adapt to any toilet’s curvature.
The robot takes five minutes to make your toilet bowl sparkling clean, is programmed to detect and safely navigate around unexpected obstacles.According to Altan Robotech, the heavy-duty plastic housing is durable, electrically safe, and able to withstand the acidic environment in most toilets.
Thanks to its cordless design, this toilet-scrubbing robot is also portable, so you can carry it to any toilet in your home. When not in use, it sits in a charging station.
source: https://www.geek.com/tech/watch-this-toilet-cleaning-robot-does-the-dirty-work-for-you-1765128/
by Stephanie Valera

Replacement Toilet Lids and Seats - Know before you go: It takes practice to master some toilet facilities - This Old Toilet 800-658-4521 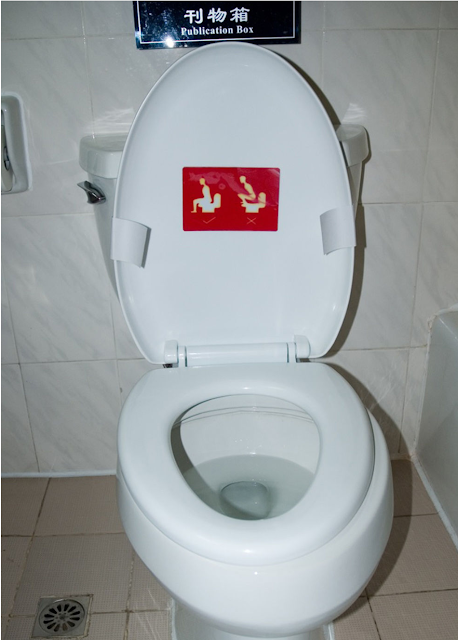 Directions on a toilet indicate to guests at a Chinese hotel that the are suppose to sit on the toilet
rather than squat on its seat.
phone by Mark Canrobert

Years ago when I told my father I wanted to write a newspaper column, he counseled me to keep my topics “universal,” as he called subjects that would appeal to everyone. I’ve seldom written about anyone or anything that every Tom, Dick, and Harriet on the planet would find relatable. Chileans probably don’t care that the Meals on Wheels program in Catawba County can always use more volunteers, for example, and it’s likely there aren’t many Russians interested in the number of area folks who own greyhounds that used to be racers.
Today, I think even Daddy, if he were still alive, would have to agree that I’ve hit upon a truly universal topic: going to the bathroom. I’ve had it on my mind to avail myself of this subject ever since reading a Travel Channel article that popped up on my news feed a while back: “Bathroom Etiquette Around the World: What You Need to Know.” The story suggested readers “use this guide to navigate international bathroom customs and facilities so you’ll know before you go.”
Adding to my desire to entertain thoughts of powder room excursions was an item I saw on ever so many internet lists of Christmas gift suggestions: the toilet stool, which looks a lot like a step stool. Its purpose is to raise the legs while one is in the midst of what some call a morning constitutional. The resulting elevation is alleged to provide an improved and healthier experience.
My question is not so much whether the thing lives up to expectations, but why it has managed to make its way onto gift-giving guides. In my family, it would drop a load of laughter and mirth into the middle of present-opening time. In other families, however, it might not tinkle the same fun bell.
According to the Travel Channel article, travelers must understand that bathrooms, especially toilets (assuming there is a toilet and not just a hole in the ground), vary from country to country. Actually, they differ from rural parts of a country to its urban areas.
For people with adventuresome attitudes, it’s no big deal. For others, it’s a very big deal. When my husband and I lived in China, we enjoyed a visit from a friend who found it to be a big deal. So much so that when we went sightseeing, she’d put nature on hold for as many as eight hours. Our apartment had Japanese manufactured toilets. They were quite nice. As a matter of fact, after we moved back to the United States, we bought three of them. One of their appeals is the warm toilet seat. I don’t know how many times guests have exited one of our bathrooms and exclaimed, “I’ve got to have one of those!”
Our friend’s displeasure with visiting the sometimes non-Western-like toilet facilities in China was multi-layered. First was the smell, which often was due to incense burning in the bathrooms. Then there was the occasional lack of doors on the stalls or no stalls at all. Additionally, very few Chinese restrooms – outside of the country’s Westernized hotels and restaurants – offered toilet paper. Finally – and this was possibly the number one source of her disapproval – she refused to make use of a squat toilet.
It takes practice, strong thighs, and sturdy knees to master this sort of toilet, which is nearly buried in the floor and requires users to practically sit on their heels. Traveling in countryside Chinese areas, my husband and I discovered that Western toilets were as foreign to residents as pit latrine types were to us. Staying in a hotel not far from a part of China where villagers lived much the way their ancestors had a few hundred years ago, we noticed a sign above the Western toilet. It indicated that guests were not supposed to squat on the toilet seat.
It’s not just China that has squat toilets. As I learned from reading the Travel Channel article, they’re are all over the world, including parts of Greece, Turkey, the Middle East, Africa, Russia, and various places in Eastern Europe.
Should you be so fortunate as to travel the world in the coming year, keep in mind that you not only may encounter different types of facilities, but you also should be prepared for the possibility of pay toilets, toilets that have pull cords for flushing, and restrooms with no soap or paper towels. Carrying coins, tissues, and hand sanitizer is recommended just about anywhere a person goes these days – even into public washrooms in our own hometowns.
On the other hand, if your destination is a city such as Tokyo, Kyoto, or Osaka, the challenge won’t be in-ground toilets. It’ll be figuring out how to use Japan’s high-tech receptacles. Some are so state of the art that users may have to stand around with their legs crossed until they figure out how to operate the things.
My motto is go with the flow. Embrace other cultures’ ways and habits.
And for Christmas gift giving this year, maybe there’s someone on your list who’d appreciate a toilet stool. If you’re willing to spend a bit more, a Japanese style toilet with a heated seat is the gift that never stops giving. Finally, for the super big spender, funding a toilet tour of the world would create memories impossible to forget.

Obviously the physical position one must employ to use a squat toilet must have something going for it if people in the West are now so interested in the potential advantages of the toilet stool that we’re being pushed to distribute them on Christmas Day.
source: https://www.hickoryrecord.com/news/know-before-you-go-it-takes-practice-to-master-some/article_c237106e-f4cb-11e8-b791-6330d398ee63.html
by Mary Canrobert
http://www.thisoldtoilet.com