Nighttime trips to the bathroom can be fraught with peril as you run a dark gauntlet of obstacles ranging from cats to locating the toilet itself. Sure, you can turn on the lights and sear your eyes with the sudden illumination. You could also install a nightlight somewhere in the restroom, but that's not much fun. How about lighting up the toilet bowl instead? IllumiBowl on Kickstarter places a nightlight right onto your toilet.
Toilet lights aren't a new concept. Kohler offers a Nightlight toilet seat with blue LEDs that costs $83. The IllumiBowl will set you back only $15 (about £9, AU$17) for a pledge. It also has the advantage of using a color-changing LED, so the light will slowly rotate through different colors every few seconds. This will be especially perfect if you ever plan on hosting a dance party in your bathroom.


IllumiBowl fits under your toilet seat, attaching with suction to the outside of the toilet bowl rim while a hook reaches over the edge to provide the light inside. Motion detection senses when a visitor arrives. The light turns on automatically and turns off once you're gone.
The lavatory gadget runs on two AAA batteries. Matt Alexander, the creator of IllumiBowl, writes in an update, "We are working with the manufacturer to make it water resistant." Here's hoping that all works out, because a non-water-resistant device hanging out near a toilet bowl could face some serious challenges.
Alexander currently has a working prototype of the IllumBowl and hopes to raise $20,000 to go into production. The project is currently up over $8,000 with 36 days left to go. This is probably going to be a love-it-or-hate-it sort of gadget. You're either the kind of person who wants a glowing toilet bowl, or you're not. But if you are, you're most definitely in luck.


Police in St. Pete say the man in this video didn't go to Subway for lunch. He went for the toilets.

According to St. Petersburg Police, 28-year old Brian Rinda admits he has a drug problem, and admitted being responsible for an odd rash of toilet flush valve thefts.
Victims include a Cracker Barrel, a Denny's, a Hooters and a Publix, among others.
In many cases, more than one valve was taken.
"He worked very fast within a matter of minutes," police spokesperson Yolanda Fernandez told FOX 13 News. "Many of the managers at the restaurants were telling us, well they had just walked out of the restroom and gone back in a few minutes later, and he had taken the flush valves."
The City of St. Petersburg was also a victim, with valves stolen at Sawgrass Lake Park and Albert Whitted Park.
"At Albert Whitted Park, he stole three flush valves and when our city employees went in to replace them, they replaced two of them and took a break. And when they came back, he'd hit again and taken the two new ones," Fernandez said.
Most of the commercial victims have security cameras, so a detective had a good image of the suspect entering and leaving one crime scene.
Scrap metal yards are now required to keep records of sellers, and Rinda's multiple trips to County Recycling on Haines Road is well documented.
Pointing to a computer screen, owner James Roberto said "that was the item, and there's the picture ID, his picture, his fingerprint."
Roberto said that particular transaction for 20 pounds of brass rewarded Rinda with $32.
The cost of replacement parts and plumbing services adds up to hundreds of dollars in each case, resulting in multiple counts of grand theft against Rinda.
The detective also caught another lucky break: Rinda was arrested for retail theft a few months ago and was the subject of a warrant for failure to appear in court. He turned himself in Saturday and was still in jail when the detective identified his suspect and started looking for him.
source: http://www.myfoxtampabay.com/story/26814183/man-accused-of-stealing-toilet-parts
by Steve Nichols

Handling a lid:
~ Handle with dry hands only.
~ Always use two hands.
~ Lift and carry from the under-side.
~ When removing or installing a lid, stand or sit directly in front of the toilet and hold the lid on the left and right sides.
~ Use care not to hit or bump the lid against the tank.

http://www.thisoldtoilet.com
Posted by This Old Toilet at 6:49 AM No comments: 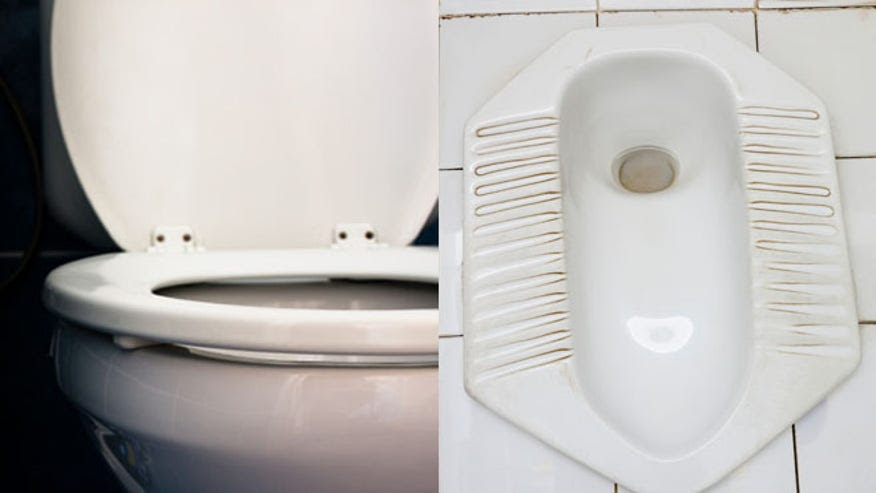 The hotel sign illustrates the right and wrong ways for guests to go use the toilet. (iStock)
In many Asian countries, squatting --rather sitting --in the bathroom is the norm. Think two foot holders and a hole –that’s about it.
That’s why fancy Western-style seat toilets can create a little confusion, as it did at this Chinese hotel in Changde in the Hunan Province.
According to RocketNews24, a traveler found this detailed how-to poster in the bathroom --which included not putting your head in the bowl.
He decided to share it on the Internet, writing: “I thought this was so funny and was cracking up, I had to hold my stomach for 3 minutes.” 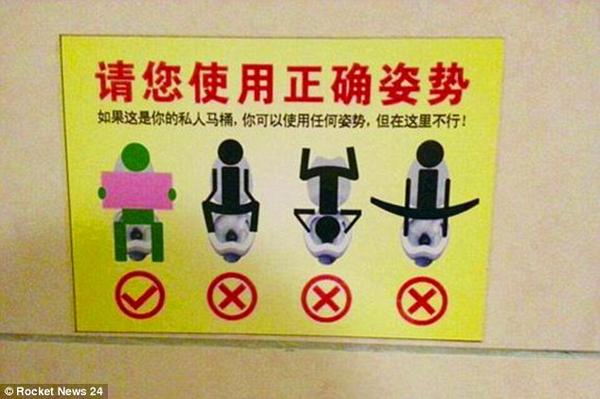 The hotel, not to miss their chance at a little potty humor, had this classic response: “There are certainly people that would use the toilet by putting their feet on the toilet seat. So, while laughing to your heart’s content, be sure to follow the rules on how to use the toilet.”
Throne-style toilets are making inroads in Asia.  In China, you’ll find them in the larger cities and at most airports.  In Thailand, there’s even been a push to replace public squat toilets with Western models, with officials saying that they’re more sanitary and better on the knees.  But most Asian homes still use the squat-style toilets.
Still, it’s a bit disconcerting for some foreign visitors to find shoe marks on the toilet seat.  And then there’s the unspoken rule that you must carry your own toilet tissue or you’ll be left high –and not so dry.
For those who'd rather sit than squat, the Shanghai Toilet Guide is one app that uses GPS software to help users locate the closest throne-style toilet among the city's 8,000 public restrooms-and can even indicate whether stalls have toilet paper.
Now, that’s a flush!
source: http://www.foxnews.com/travel/2014/10/07/chinese-hotel-posts-hilarious-sign-instructing-about-how-to-use-western-style/ 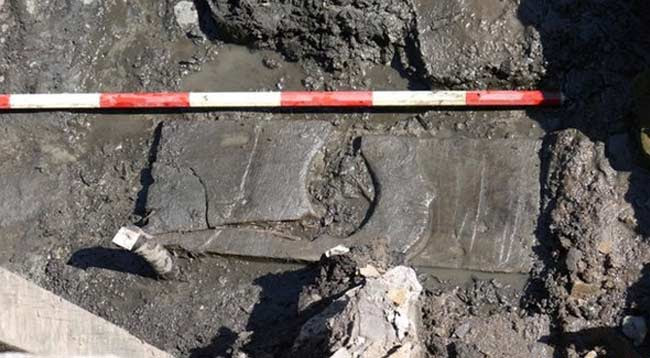 
London: Archaeologists have unearthed a unique 2,000-year-old wooden toilet seat from the Roman fort of Vindolanda in northern England.
The seat was found in a muddy trench and has been preserved in the anaerobic conditions that exist at Vindolanda, media reports said.
"We know a lot about Roman toilets from previous excavations at the site and from other locations across the world, but never before have we had the pleasure of looking at a perfectly preserved wooden seat," Andrew Birley, director of excavations at Vindolanda, was quoted as saying.
"It is made from a very well-worked piece of wood and looks pretty comfortable," Birley added.


http://www.thisoldtoilet.com
Posted by This Old Toilet at 8:00 AM No comments: