stivals.
The Silver Lake community will host its annual Pola-Czesky days the first weekend in August.
The event features a 5K walk/run, fireworks and the oh-so-popular toilet bowl races.
On the first Friday in August, Silver Lake’s Main Street transforms from a quiet thoroughfare to the highlight of Pola-Czesky days.
“They put a toilet bowl on a frame, with wheels, and race it down a street,” said Sharon Bandas, a resident of Silver Lake.
Harvey Mikolichek founded the races.
He said the idea came to him in effort to expand the town’s annual festival back in the 1960s.
“We got together and the idea just came out,” he said. “My grandmother was sitting by us and said, ‘That’s disgusting,’ and we thought, ‘We’ve got something here,'” Mikolichek said.
During the first year, the toilet bowl races were nothing more than an old latrine strapped on a red wagon and pushed down a hill.
“It wasn’t the smartest thing to do, and we found out how sharp the porcelain is when they break,” Mikolichek said.
Over the years, the competition evolved for safety reasons. In the ‘70s and early ‘80s, competitors built their own toilet bowl cruiser and raced down a flat road under the power of a plunger.
However, through the ‘80s and ‘90s, the toilet bowl races were canceled and eventually replaced by a lip syncing contest.
Seven years ago, the race made its return with the help of Silver Lake resident Ben Stifter.
“We started talking one night and wanted to start the races up again,” Stifter said.
While Stifter wasn’t alive to see the first generation of toilet bowl races, he heard the old stories of tough competition from his family. One of those family members even passed down one of the old toilet bowl racers for the first year of the new competition.
“It was pretty crazy,” Stifter said. “We had a big crowd, a really big crowd.”
In the last few years, the race underwent another evolution with latrine themed obstacles added along the two-block course.
“That adds a lot of fun, because it takes away from the straight race,” Stifter said. 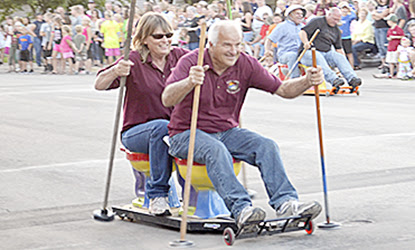 Teams of two sit on toilets attached to wheels and push their way through the course with plungers.
In their first obstacle, teams must unravel an entire roll of toilet paper before moving on.
In the second obstacle, teams race to fill a toilet tank with water.
The third obstacle involves spinning around a plunger before racing back to the starting line.
“It’s more challenging than it looks, that’s for sure,” said Kerry Venier, Silver Lake’s city clerk.
While participants put in all their effort for a first place finish, everyone sees the humor involved in using old toilet bowls.
“I didn’t have a paper to read, had I had that, I probably would have flew,” Venier said during a practice run.
“It makes it fun for an audience and gets them involved, it’s fun,” said Tom Hoffman, who lives in Silver Lake.
This year, the contest will add another element with a contest based on the most elaborate latrine.
“I know we’re going to see a taco. I know we’re supposed to see a hunting scene,” Mikolichek said.
Only in Silver Lake can a toilet be part of a team sport.
“It’s just a hilarious thing,” Bandas said. “Everyone lets their hair down and has fun.”
source: http://minnesota.cbslocal.com/2016/07/24/finding-minnesota-silver-lakes-toilet-bowl-races/
by Rachel Slavik
http://www.thisoldtoilet.com

IndefinitelyWild is a lifestyle column telling the story of adventure travel in the outdoors, the vehicles and gear that get us there, and the people we meet along the way. Follow us on Facebook,Instagram, and Twitter.
In our extensive experience testing outdoor toilets, we’ve never had a more satisfying poop than the one achieved on this wooden throne in the Cascade Mountains. The view, as you can see, is stunning, but the toilet’s location also shelters it from the wind, basks it in the warm rays of the sun, and offers near complete privacy, thanks to its perch well off the main hiking trail. The combination, we feel, makes it the single greatest toilet in the country.

While many equally-scenic wild pooping opportunities exist for those prepared to dig a small hole, pack their poo into a baggie, or smear it across rocks, nowhere else offers the comfort of a wooden seat or the ability to carry only toilet paper and reading material with you. While most wild pooping is conducted in a rushed fashion, this toilet offers the pooper the ability to relax and enjoy the experience. If you so desire, an entire issue of the New Yorker can be finished while perched in front of this view.
source; http://www.outsideonline.com/2098476/best-toilet-america
by Wes Siler

Toilet Replacement Lids and Seats -This University Looks like a Toilet: Crappy Architecture - This Old Toilet 800-658-4521

I would think that a college that looks like a toilet would not be the first place that students would choose to attend – unless they want to flush their money down the drain. 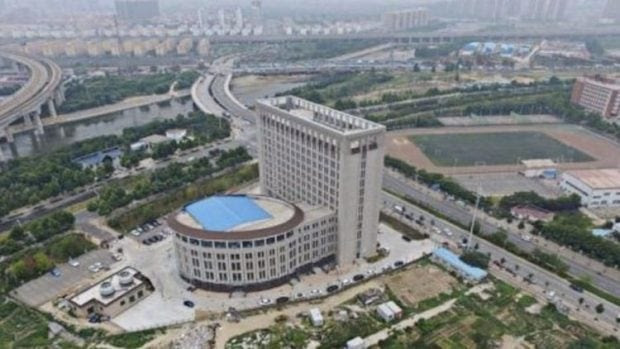 Back in February, the State Council of the Chinese central government released an “urban blueprint” calling for buildings that are “suitable, economic, green and pleasing to the eye,”. They didn’t want “oversized, xenocentric, weird.” Oops. 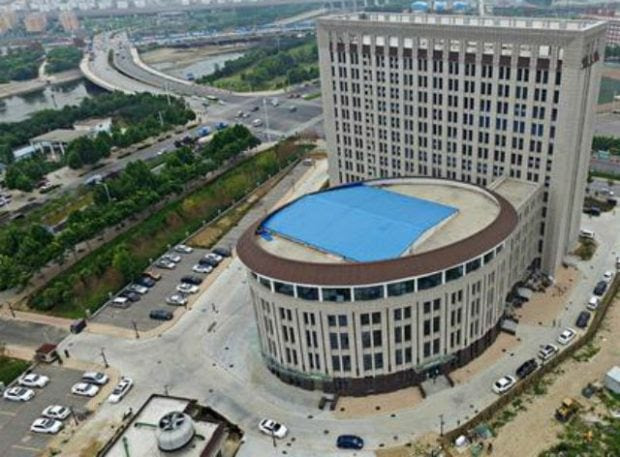 This building was recently unveiled by an educational facility in Hainan, China. And yes, it looks like a toilet. I say just go with it at this point and act like it was intentional. Put in a urinal cake elevator. Even better: Maybe a handle that makes a flushing sound and moves when a water slide elevator jettisons you from floor to floor. It’s all good. We meant to do that. 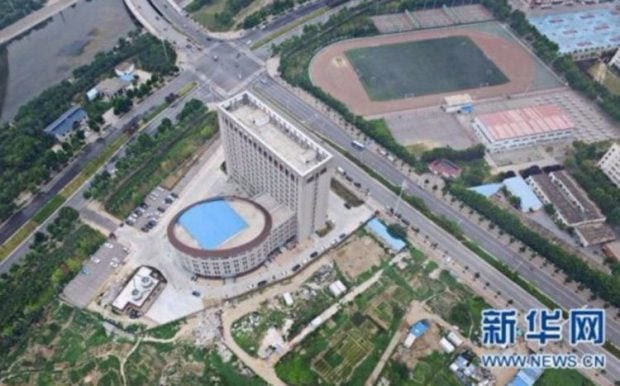 A plunge into an eighteenth-century toilet in Philadelphia has left archaeologists bowled over with its insights into Revolutionary War life, according to a new report by National Geographic.
While a lot of people usually think of archaeology as uncovering tombs or exploring temples, in reality, the majority of it is straight-up garbage—because while written sources can lie or be misled, the trash they left behind usually tells a more accurate story.
Which is why certain features—like latrines—can cause a lot of excitement, as people frequently used them to dump their trash before trash collection was an established practice. The pit latrine found behind a small Philadelphia house in the summer of 2014 was no exception; dug in 1776 and filled in in 1786, it provides a rare snapshot of life in the nascent United States.

Found fittingly on the future site of the Museum of the American Revolution, the latrine’s 619 artifacts reflect Philadelphia as it began to boom as a trade and manufacturing hub—like German tankards and fine Chinese porcelain (both broken, of course). Such items were then examined in the light of historical research into the time, including deeds, insurance maps, and Quaker meeting minutes.

Photo courtesy of the Museum of the American Revolution
From this, the researchers have been able to estimate the exact date the pit was dug: July 10, 1776, when a couple named Benjamin and Mary Humphreys bought a house in the area. Of course, being a private home, one would assume their latrine would host the usual household garbage, but as it turns out, the Humphreys’ latrine revealed their secrets through their interesting trash.
Instead of broken kitchenware, the archaeologists pulled up huge numbers of drinking glasses, tankards, punch bowls, serving dishes, smoking pipes, and alcohol bottles.
What was the paraphernalia of a bar doing on a property that never had a tavern license, according to records? It appears that the Humphreys were running what was referred to as a “disorderly house”—something like a speakeasy of ill repute. Mary Humphreys would be arrested for this very reason some eight years later, in July of 1783.

Perhaps even more interesting, Some of the artifacts show a bit more of the political leanings of the time, starting with shards of glass with the word “love” etched on it.
"When we first saw that word we thought, 'Oh, it's just some lovesick guy who's drinking too much and writing a message on the window,'" Rebecca Yamin, the excavation's principal archaeologist, told National Geographic.
But then more of the glass was found, leading to a nearly-full phrase being recovered: "We admire riches and are in love with …"
"And we know the last word is idleness," said Yamin. In fact, this was a somewhat popular quote at the time; it comes from an ancient Roman senator named Cato the Younger, and was repeated during a play that was making its rounds at the time. They play involved Cato defying the tyranny of Julius Caesar—which apparently reverberated well with American colonists who wished for independence from Britain.
"This quote would have been known to people who were thinking politically in 18th-century Philadelphia," said Yamin. "This man was writing a political message, which is so consistent with what we know was going on in the taverns at the time."
Of course, all this and much more was found—and some of it is even making its way into the future Museum of the American Revolution when it opens in April of 2017.
"Often in urban sites we dig this stuff up and it just goes into the basement of some state institution, never to be seen again," said Yamin, "but in this case it's really going to be seen. We're really excited about that."

http://www.thisoldtoilet.com
Posted by This Old Toilet at 7:00 AM 1 comment: