November 19th, as decided by the United Nations in 2013, is World Toilet Day. The U.N. is still hoping that having added another international [insert thing here] day to the roster, it will bring awareness to the fact there are still 2.4 billion people in the world without proper sanitation. In the way of puns though, World Toilet Day has most likely wiped every other international [insert thing here] day off the calendar.
People are aware, and based on scrolling though the obvious search criteria at sites such asGoFundMe and IndieGoGo, they are trying to help. Of course, our general nature is to be ambivalent to such world issues (besides the occasional armchair activism on social media) and to focus more on our own asses — in this case, both literal and figuratively. Everybody poops. Not every one gets to do it in style.
Most of us aren’t keenly aware of what it’s like to not have a place to poop. From the worst truck stopsin America, to our standard ceramic bowls with rust stains, we are kind of spoiled. We’re also not all aware what true toilet luxury looks like. It looks like stainless steel flush against the wall, that’s what it looks like. Luxury looks like a magic dookie box that plays music while you beat box your bowels. Luxury dries and massages your backside. For unabashed bathroom luxury however, you need adiamond encrusted toilet. Just don’t try to compliment it with diamond encrusted toilet paper. Or you could just poop in bags.

Credit: Russ Oneal/GoFundMe
When you can’t afford the Rolls Royce of toilets though, there is always another way to show the world that your toilet game is at another level. Like 28-inch rims on a Buick Regal, you can compliment your toilet tech with the right upgrades. Tushy transforms your toilet into a luxury bidet (a thing that replaces the garden hose for general ass cleaning maintenance). Slap on an Autopusherand now your toilet is airport terminal quality. All you need now is the neon ground effects and you are ready to dump in style. Add a motion activated GlowBowl or the more colorful IllumiBowl and watch your house-guests dook in the dark. Well, don’t actually watch them. That’s creepy. So isteaching your cat to use the toilet.

With all this new toilet tech, you might be spending a bit more time observing your fiber loads. Sitting or squatting you are going to want to track this time. You are also going to want to be entertained. The PooTime app offers a solution for both. It’s not exactly Candy Crush, but that silly game doesn’t let you time, rate, and share your bowel buffets with an integrated PooLog. Not making a downtown disaster at home? What you need is a Tinder, but for public restrooms. This app shows you the closet public restroom along with simple rankings as to the cleanliness of such. It does not yet suggest witty things to Sharpie on the stall doors. Feeling more worldly on the porcelain throne? Slap your thumbs on Pooductive to chat and play games with fellow stall dwellers around the world. Think globally, shit locally.

If you really want to save the world and not just improve your standing among the high pressure world of bathroom tech snobbery, there are ways you can help on a micro level. Take the Sarah McLachlan-worthy plight of Jill. Jill has dropped her phone in a thrift shop as well as in the toilet. Every hour another iPhone is dropped in the toilet. Not all of them survive their harrowing journey into the murky depths. Toilets are not the enemy here, pooping shouldn’t have to be what ends a phone’s journey.

On World Toilet Day, we should take a moment to appreciate how much of our culture is dedicated to the thing that you don’t think your girlfriend does. We should consider the infrastructure dedicated to removing our feces from our general proximity, and the 2.4 billion that don’t have the simple luxury of poop displacement. We’ll worry about about the smell later. For now, just be glad you have a place to stop and plop.
Image credit Flickr User K1ng
source: http://www.forbes.com/sites/curtissilver/2015/11/18/celebrate-national-world-toilet-day-with-this-high-tech-double-flush-bonanza/
by Curtis Silver

There were plenty of examples from the past year of Asian tourists in Jackson Hole having trouble as a result of cross-cultural misunderstandings.
A lack of true wildlife in heavily populated Asian countries led to some visitors getting too close the Greater Yellowstone Ecosystem's not-always-so-docile megafauna.
There were tales of foreign visitors filling their gasoline-powered rental cars with diesel fuel.
The scornful looks line-cutting Chinese tourists sometimes drew undoubtedly were a result of Westerners not understanding how things work when crowds gather a hemisphere away.
But perhaps the most unexpected consequence of the lingual and cultural barriers for Chinese and other Asian visitors who flocked to northwest Wyoming this year played out in the pit toilets around Grand Teton and Yellowstone national parks.
"Our maintenance staff was seeing basically broken toilet seats, especially in the vault toilets," Teton park spokesman Andrew White said.
In all, about a dozen of the 42 vault toilets in Grand Teton park wound up broken this summer, he said.
What was happening, park officials discovered, is that tourists from Asian countries were squatting, with their feet on the lids, and the shuffling of legs bearing a body's full weight was causing toilets to snap where the hinges connect the lid to the bowl.
While it may sound bizarre, it's how they poop in public places back in their home countries, White told the Jackson Hole News & Guide (http://bit.ly/1SMdN7x).
"They're used to squatting on the toilets," the spokesman said. "That's a cultural expectation in China for a public restroom, which is obviously very different from our expectations."
The park worked with a Chinese student this summer, and the foreign visitor helped the park crack the toilet mystery. The broken seats were typically being found in high-use places where tour buses unload, such as Schwabachers Landing, White said.
Visitation from Asia is anticipated to keep climbing, and estimates were that around a half million Chinese and other Asians came through this year.
To plan ahead, Grand Teton's sign shop will make signs this winter that will illustrate proper use of a lidded, elevated toilet. They will be installed at all 42 vault toilets, White said.
"Obviously this is not the only things we're doing to make the parks more welcoming to international visitors," White said.
One Jackson Hole resident who has worked to smooth over the visits of Chinese to the valley wasn't surprised to learn of their propensity to squat while doing their business.
"Have you ever seen the public toilets in China?" real estate agent Bruce Simon said. "They're on the floor and you squat. And the Chinese and other Asians grew up using them, so they're comfortable."
With proper signage — and with a willingness to use Mandarin in park newsletters and food menus — Simon was confident that misunderstandings due to cultural divides could be reduced.
"The Chinese are really smart," Simon said. "They are well educated, they're eager to learn and they're really good on their mobile devices.
"It's just a matter of education," he said.
source: http://www.idahostatesman.com/news/state/idaho/article44903178.html
by Mike Koshmrl 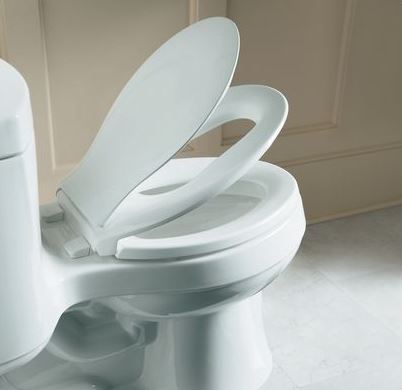 Courtesy of Kohler | The Transitions Family Toilet Seat from Kohler.

Installing a new toilet seat for new bathroom users is always a good idea, especially now that today's toilet seats have more fun features available than the old standard seats. For example: You can find seats with built-in fresh air filters, grip-tight bumpers to stop seat sliding, even night light toilet seats.
For young children, there are three new toilet seat features I have worked with, and I find them very useful:
1. Slow close technology to avoid seat slamming.
2. Quick release hinges to easily remove the seat for cleaning.
3. Transition-type seats to accommodate adults and children. These new style toilet seats have double lid seating sizes, so anyone on the throne can feel like a king.
source: http://www.readingeagle.com/home-and-real-estate/article/ask-the-plumber-fun-features-available-for-new-child-friendly-toilet-seat
by Ed Del Grande 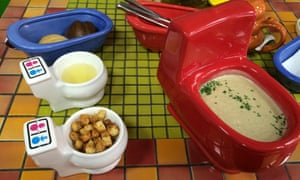 A bowl of mushroom soup at the Crazy Toilet Cafe. Photograph: Shaun Walker for the Guardian
Eating and defecation: two parts of life most people like to keep well segregated. Not so the owners of a new Moscow cafe, where both the interiors and the food are toilet themed.

Crazy Toilet Cafe opened on Friday in the Russian capital, and will allow patrons to eat an array of dishes that can only be described as faecal-inspired, served in toilet-themed crockery. Instead of seats, there are about 50 real toilets for guests to sit on while eating. 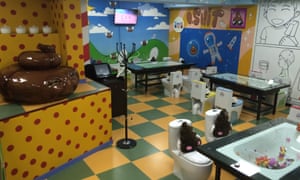 The downstairs dining area at Crazy Toilet Cafe. Photograph: Shaun Walker for the Guardian
Located on Arbat Street, a touristy, pedestrianised thoroughfare lined with portrait artists, buskers and hustlers, the restaurant admits it will probably mainly draw one-time novelty visitors rather than repeat clients.
“We think people will walk past, think ‘What on Earth is that?’ and then come in to check it out,” said general manager Inga Yaroslavskaya. “It’s not everywhere you can eat good food from a toilet bowl and drink from a urinal at very reasonable prices.”

The restaurant’s Crazy Lunch menu costs 500 roubles (£5) and features three dubious courses each with a lavatorial theme: a brown and creamy mushroom soup served in a toilet bowl, followed by a swirled sausage served with three piles of steaming mashed potato. If visitors have not lost their appetite by this point, they can finish it off with a bowl of whipped chocolate ice cream.

There is no escaping the toilet theme on the drinks menu either.
“We have a great range of hot cocktails served in mini urinals,” said Yaroslavskaya. Even boring old green tea came served in a tiny toilet bowl, in which it took on a disturbing yellowish hue.
The walls are decorated with faeces-themed cartoons, but guests who need to use the toilet for real must use one of the three cubicles at the back of the restaurant. The toilet bowls used as restaurant seating have been sealed shut to prevent any over-excitable patrons taking things a bit too far.

It isn’t, however, the first toilet-themed restaurant in the world: there is a whole chain of loo-themed Modern Toilet cafes in Taiwan, but Yaroslavskaya believes Crazy Toilet Cafe is the first in Europe. 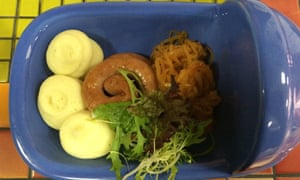 Sausage and mash, part of the Crazy Lunch menu. Photograph: Shaun Walker for the Guardian
The cafe’s owner is Alexander Donskoi, formerly mayor of the northern Russian city of Arkhangelsk. After announcing a rather implausible presidential run in 2007, he was promptly arrested and given a three-year suspended sentence. After spending eight months in jail, he was released and opened the G-spot sex museum in Moscow. Now, he has moved on from sex to toilets.

Asked whether the cafe was aimed at genuine coprophiliacs as well as those with merely a morbid curiosity, Yaroslavskaya said the doors are open to all who behave in a civilised manner.
“It’s hard to identify them just by looking at them, so of course they are welcome if they behave normally. We opened a strange restaurant, so it’s natural that some strange people might want to come.”