A demonstration went hilariously wrong live on Fox 8 News during a segment at the Nari Home Improvement Show Thursday.
Our Kenny Crumpton was at the IX Center previewing the event, and stopped by the Kohler area, where several state-of-the-art toilets are on display.
He and Kohler representative Stephen planned out a demonstration using a pound of "faux poo" to show the flushing power of the toilet -- many Kohler toilets are built to flush up to 2.2 pounds.
Kenny says they practiced successfully three times before the on-air demonstration.
But when the cameras were rolling, Stephen dumped the poo, flushed the toilet -- and the faux poo remained.
"I guess that's too much poo -- plunger!" said Kenny.
Watch the hilarious moment in the video player above.

http://www.thisoldtoilet.com
Posted by This Old Toilet at 5:30 AM No comments:

Replacement Toilet Lids and Seats - What's germier than a toilet seat? Plenty, so wash your hands, please - This Old Toilet 800-658-4521 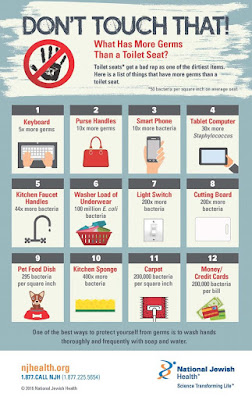 News for those who feel rather smug wiping down a toilet seat before use: Toilet seats are the least of your germ worries.
Such is the news from LeeAnn Bryant, an infection preventionist at  National Jewish Health , the national academic research facility in Denver.
Toilet seats didn't even make her top 12 of the germ-clogged items surrounding us. Here they are. We'd say enjoy, but perhaps better to say ...
Well, we're not really sure what to say other than wash your hands. Please.


If you wash your hands correctly, though, you can get that yuck off and thus reduce your risk of intestinal illness by 40 percent. So add 20 seconds to your time in the bathroom and scrub away.

What do you get with a $10,000 toilet? At CES, you get a sparkling clean fundament, thanks to Japanese loo-maker Toto, which is at CES to put up the seat on its 2017 model; I took a look.

The Neorest AC doesn't actually have a price yet, but its 2016 predecessor cost $10,200. For that amount of cash, you get a toilet whose otherwise-unsightly tank becomes invisible, built into the wall of your house. It automatically opens, closes, and sanitizes itself after every use. The bowl is made of a bacteria-resistant material, and ionized water and ultraviolet light prevent anything nasty or smelly from growing. You need to scrub it about once a year, Toto reps said.
The toilet has a remote control, because of course it does. It's a short-distance remote that fits in a bracket on your wall and lets you command first the bidet function, to tidy you up, and then the gusts of warm air to dry you off. There are even two settings so different members of a family can be washed in just the right spot.

I try not to get caught at CES with my pants down, but I sat on the heated seat and used my hands to feel the spray and the dryer. It really does feel like the Dyson of toilets, rounded and futuristic, with a cuddly care taken to the engineering. The bidet arm extends shyly when you press the button, and then retracts invisibly before the warm air blower starts.
The AC lacks some of the cutesier gimmicks that you see on Toto's Japanese models. It won't play little bird sounds to cover your tinkle. And you can get Toto's core body cleaning functions in Toto's seat-only models like the $599 C100, which has a heated seat, "front cleanse," and a dryer. What the less expensive models lack is the Neorest's ability to sanitize itself.
The Neorest AC will appear later this spring. Expect it to be spectacularly expensive, but also to make you wonder if you'd poop better if you spent $700 on a toilet seat. 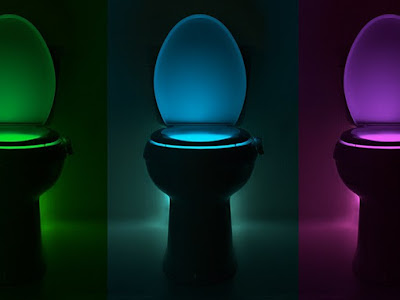 Turning on the light makes it almost impossible to get back to sleep after a late-night trip to the bathroom. The close-only-one-eye trick almost works, but you’ll be hard-pressed to teach that to a potty-training child.

The IllumiBowl 2.0 solves this annoying problem by turning your toilet into a motion-sensitive night light. To install, simply stick it to the side of the bowl with its suction cups. Powered by 3 AAA batteries, IllumiBowl shines in your color of choice and includes 3 levels of brightness.
Bring some glowing flair to the lavatory with brilliant light-cycling patterns. This useful and amusing bathroom accessory has temporarily dropped 25% in price to just $14.99. It retails for $19.99, so pick up your discounted toilet light.