Alexa-controlled toilets are a thing in 2018, but cost thousands. An enterprising person can make their own by following these instructions. It takes a bit of work, multiple components and about $750 (plus the cost of the toilet), but the end result is a voice-controlled toilet — and everyone needs that in their life.
The trick is buying a bidet that has an IR remote and then using an Adafruit WiFi development board to trigger another device to flush the toilet. Easy!
Home voice control has long been considered the gold standard for home automation and Alexa and Google Home are making it easier than ever to make a personal Jarvis. It was just two years ago Mark Zuckerberg set a personal challenge to develop an AI system to control different parts of his home, and now it just takes a little hacking and coding for someone to do the same — but Zuck’s AI system has Morgan Freeman’s voice, which alone puts it on a different level from Alexa.

source: https://techcrunch.com/2018/02/21/heres-how-to-make-alexa-control-a-toilet-because-why-not/
by Matt Burns
http://www.thisoldtoilet.com
Posted by This Old Toilet at 7:00 AM No comments:

Replacement Toilet Lids and Seats - Can YOU tell what’s funny about this photo? Male employees are left in hysterics by female colleague’s cleaning efforts in the gents - This Old Toilet 800-658-4521


A viral photo of men's urinal has left women baffled - after a shop worker claimed it had left him and his male colleagues in hysterics.
Reddit user Martinjbell posted the snap from inside the gents' toilet at his workplace, showing a single roll of toilet paper hanging from the wall next to the urinal, writing: 'Female co-worker can't understand why we're laughing at how she cleaned the men's bathroom.'
The image quickly went viral with almost 1,400 comments in less than 24 hours - with men clearly amused that she thought they would need toilet paper rather than performing a simple 'shake'. +1
This snap, taken inside the gents' toilet at one man's workplace, has divided Reddit. It shows a single roll of toilet paper hanging from the wall next to the urinal

The original poster, who did not reveal where he is from, added: 'The best part is that she put a roll next to EVERY urinal.'
Some were endeared by the woman's attempt at a clean-up, with one person writing: 'Aww gotta give her an A+ for effort. She meant so well!'
One man quipped that while it was a 'considerate' thing for the employee to do, it was also 'completely, novelly wrong'.

Dividing opinion: One man quipped that while it was a 'considerate' thing for the employee to do, it was also 'completely, novelly wrong' - while women have been left baffled by the furore
Another recalled a female colleague reacting with 'complete shock and disgust' after discovering her male co-workers 'shake it' rather than wiping.
Others debated the pros and cons of using toilet tissue, with one penning: 'When I pee at home I always dry it with toilet paper.
'It's a shame that urinals aren't designed to flush down toilet paper. This should become a thing.'
While one baffled office worker wrote: 'I have to be honest, as a woman, I didn't see anything wrong here until I read the comments.'

Kampala, Uganda | THE INDEPENDENT | Japan is known as the most polite nation on Earth, and that extreme politeness extends to all aspects of life, including bathroom etiquette.
Many public toilets feature a wall-mounted device that, when pressed, creates a sound that masks that of urination. However, Japanese homeware brand Lixil has partnered with instrument maker Roland to address the sensitive issue of bathroom noises.
They’ve created a new device called the “Sound Decorator”, which, unlike current solutions that only try to mask noises by emitting another sound, generates a pattern that makes the original sound less audible altogether.
There is no word yet on whether the technology will expand to include the infinitely more embarrassing noises produced by gas and defecation.
source: https://www.independent.co.ug/smart-toilet-cancels-embarrassing-noises/
http://www.thisoldtoilet.com 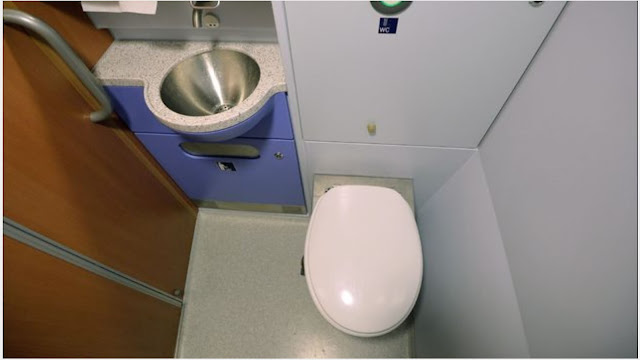 How many plumbers does it take to fix a faulty toilet on an airplane?
None. They were all drained.
A Norwegian Air shuttle flight from Oslo to Munich was forced to turn around Saturday morning because of toilet problems, The Washington Post reported. On board were more than 80 plumbing industry workers traveling to a trade event.
The ironic circumstances led to howls of laughter among the passengers.
“Seldom has there been more laughter in an airplane ... when the reason given is ‘toilet problems,’” Frank Olsen, chief executive of the Rorkjop plumbing company told The Washington Post on Wednesday.
According to the flight data website Flightradar24, the southbound flight was heading toward Germany across the Skagerrak Strait. But 15 minutes after takeoff, the plane banked east and returned to Oslo.
The dozens of plumbers on board were unable to help out, Olsen said.
“We’d have gladly fixed the toilets, but it must unfortunately be done from the outside, and we didn’t want to take a chance on sending out a plumber at 10,000 meters altitude,” Olsen told Dagbladet, a Norwegian tabloid.
Olsen said his workers could resist toilet humor, even after their flight was rescheduled later in the day, the Post reported.
“Even the flight attendant came and told me that she have never done a U-turn with that many passengers smiling on board,” he told the Post. “We are still smiling.”
source: http://www.kiro7.com/news/trending-now/plane-carrying-dozens-of-plumbers-aborts-flight-because-of-toilet-problems-1/693887373
by Bob D'Angelo
http://www.thisoldtoilet.com