If you think they’ve thought of everything, what about a toilet that costs $8,000? It could come to a loo near you by the end of 2019. What could possibly make a bit of porcelain worth that much money? It might just become priceless if its smart technology can identify a health problem before its too late. Here is how artificial intelligence is being used for toilets. 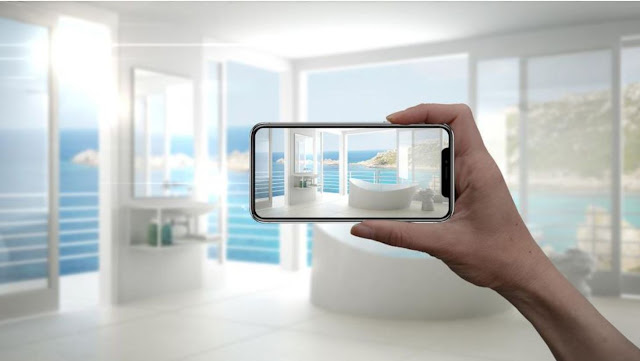 Toilet Makeover
As artificial intelligence has been altering our homes and workplaces, our toilets were neglected. Even though Japanese companies have been selling high-tech toilets since the 1980s, they hadn’t gained much traction in the rest of the world. That’s not the case anymore! Kitchen and bath supplier Kohler just introduced its second-generation Numi 2.0 Intelligent Toiletthat comes equipped with LED lights that can change color dynamically; built-in Amazon Alexa so you can inquire about the weather, ask Alexa questions and play your favorite tunes while relieving yourself; hands-free, motion-activated (and heated) lid; Bluetooth; bidet and dryer; and more! Of course, in the case of a power outage, the toilet has an emergency flush feature.
Toilets as a Health Tool
Aside from the novelty of a smart toilet with all the bells and whistles, smart toilets can actually play an important role in monitoring health at the hospital and at home. One toilet seat developed by the Rochester Institute of Technology contains devices that measure blood oxygenation levels, heart rate, and blood pressure to signal when someone is at risk for congestive heart failure. The device was part of a study to determine ways to reduce hospital readmission rates; nearly 70% of patients with congestive heart failure are readmitted within 90 days of discharge.

Japanese firm Toto created one of the first smart toilets that could monitor health indicators in the early 2000s. It was able to monitor sugar levels in urine, check body weight, temperature and hormone levels and transmit the data to computers and doctors who could advise about fertility. Toto’s Flow Sky toilet can measure urine flow by monitoring the water level in the toilet. Changes in urine flow could signal a prostate or bladder concern.
Other companies' projects focus on solutions that would allow the elderly and people with disabilities to live independently longer. The iToilet project created a toilet that could adjust the height and tilt of a toilet via voice commands and have sensors to detect the safety of people using them. This not only helps the people using them be more independent but also relieves strain on their caregivers.

What if the toilet in your home could monitor your health by analyzing your daily waste? This might be possible on a wide scale in the future.Discreetly placed sensors on the toilet could retrieve the data that artificial algorithms could analyze to determine early signs of disease if there are other health issues that need to be addressed or manage conditions such as diabetes. Since toilets get used several times a day, it makes capturing data easy and part of a person's everyday routine. This consistent data could help us all shift to a more proactive response to healthcare.
Smart toilets could also have an essential role in monitoring public health. With the help of data collected from smart toilets in public spaces in combination with the weather and other data from satellites, it could give global health professionals early warnings of a disease outbreak before it becomes a crisis.
Since human waste leaves a lot of clues about a person's overall health, more consistent analysis of it could be beneficial. Many illnesses and ailments such as kidney disease, bladder issues and infections, cancer, and more leave tell-tale signs in urine and feces that they have invaded the body. Chemical analysis, cameras, and other techniques can be used to gather this intel. Unlike wearable health trackers, people don't need to remember to charge batteries or "put on" a smart toilet. A person's consistent use of a smart toilet will allow for consistent data creation without them needing to remember or do anything outside of their routine.
Toilets are the same as any consumer product—the more interest and demand for smart toilets that can track health status the more companies will jump in to create the supply. Now that consumers are using health and fitness devices, will they be more interested in a smart toilet? IfGoogle getting a patent for a blood pressure-monitoring toilet is any indication, we believe intelligent toilets will begin to proliferate assuming manufacturers make them easy to use and reliable as well as overcome the privacy and security concerns people will have about collecting this very personal data.
What reservations do you have about using a smart toilet?


There are very good reasons for using them, especially in smaller spaces.
When visiting Europe, it seems that almost every toilet you see is an in-wall style with two buttons on the wall and a wall-hung toilet bowl. It's essentially the standard; I asked Ben Adam-Smith why he put one in his Passivhaus and that's what he said: It's standard, everybody does it.
When I divided my house into two units, I didn't put a bathroom on the third floor at the time, and recently decided to add one. Space was tight, and the single biggest benefit of in-wall toilet designs is that they save a lot of space, about nine inches of depth and a bit of width too.
Another benefit is that they are much easier to keep clean; the bowl is wall-hung so it is easy to clean the floor, and there is about half as much porcelain.
The main downside to these toilets is that they are expensive to buy; ours is from two suppliers, Geberit for the in-wall stuff and Toto for the bowl. They are also more expensive to install. I always thought that maintenance was an issue, given that you can't just lift off the lid to get at the ball cock or float, but these are designed so that you can reach it all through that panel with the buttons.

Geberit unit framed in wall/ Lloyd Alter/CC BY 2.0
Here you can see the Geberit unit mounted in the 2x6 framing of the new wall enclosing the bathroom built by Greening Homes.

Detail at base/ Lloyd Alter/CC BY 2.0
Another benefit, for those who want a higher toilet, is that those feet are height adjustable, although you can't change your mind once it is framed into the wall.

© Geberit 4 and 6 inch units
In Europe almost everyone uses a nominal 6" deep unit connected to a 4" drain, but they developed a shallower 4" unit for a 3" drain that is standard in North America. Even though it ate up two inches, I went for the 6" wall because there is a lot of leverage action when sitting on that toilet and I thought the 6" unit would be stronger and more stable. However, they are both rated for 880 pounds of load.

Lloyd Alter/CC BY 2.0
These are not that common in North America and installing it was a bit of a learning experience; the plumber read 15 warnings telling him DO NOT OVERTIGHTEN so he didn't; on the first use the toilet was flexing, opening the drywall on top and pushing it in at the bottom. I was certain we were going to have to take the whole wall apart and add blocking. It turns out that you have to use a torque wrench and get it just right – tight enough to hold the bowl in the right place, not too tight to crack the porcelain.

Almost finished bathroom/ Lloyd Alter/CC BY 2.0
Now that it is almost finished we can ask, was it worth it? There is no question that it is a much cleaner look in a very small space. Given the cost of real estate and building, in new construction one could make the case that the space saved is worth a lot more than the extra cost of the toilet. The dual-flush buttons are bigger and more obvious, and it is much quieter.
In Europe, almost everyone uses these; after putting one in, I wonder why North Americans are willing to have big clunky toilets bolted to the floor with all kinds of gunk-catching exposed parts. This makes so much more sense.
source: https://www.treehugger.com/bathroom-design/do-european-style-wall-toilets-make-better-bathrooms.html
by Lloyd Alter

It was estimated by Fluidmaster in 2006 that there are 250 million toilets installed in private households in America. This does not include public facilities, offices, hotels, stadiums, schools, dormitories, resorts, etc.

~ Beginning in 1994 all toilets manufactured are marked with their Gallons Per Flush (GPF) rating. The rating may also be shown in liters, Liters Per Flush (LPF). The markings are on the bowl where the seat attaches. If a toilet has no marking, then it is 3.5 GPF or greater.

~ Toilets consume about 25% of water inside a home. (Southern Nevada Water Authority.)

~ Low-flow toilets cause stink in San Francisco. Skimping on toilet water has resulted in more sludge backing up inside the sewer pipes resulting in a rotten egg smell in some areas. (San Franciso Chronilce 2/28/11.)

~ Enameled wooden toilet seats and croquet balls are made of the same materials in the same factory - Bemis Manufacturing, Wisconsin, USA.

~ The first stall in a public bathroom is the least used and the cleanest. (AmusingFacts.com)

http://www.thisoldtoilet.com
Posted by This Old Toilet at 7:00 AM 1 comment:

Replacement Toilet Lids and Seats - Watching Nemo! This toilet in Japan is surrounded by an aquarium on three sides - WATCH - This Old Toilet 650-483-1139 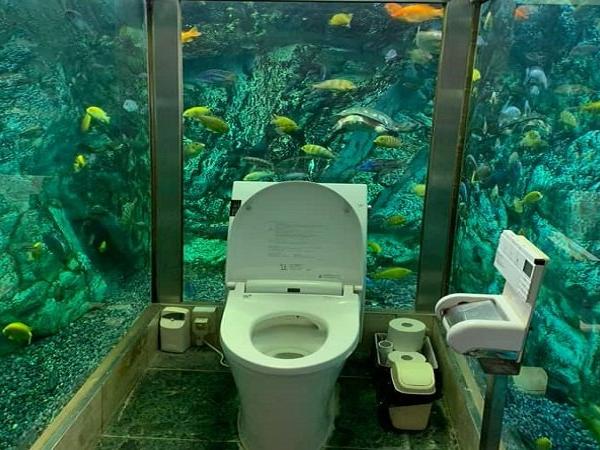 It has become one of the most popular tourist attractions in Japan.

A cafe in Japan is famous for having one of the most bizarre toilets - it is surrounded by a giant aquarium. The Hipopo Papa Cafe in Japan's Akashi lets its customers enjoy the exotic fish and a turtle while using the washroom.
The cafe's owner spent £200,000 (Rs 1.8 crore approximately) for installing the bizarre toilet, according to a report in the Daily Mail.
Visitors to the cafe have taken to social media to share photos and videos.
The unusual washroom can be used by women only, however, if the cafe is not crowded, the staff allows the male customers to take a look at the place.
The toilet has been in operation for 12 years, according to Oddity Central. The aquarium toilet has become one of the most popular tourist attractions in the area.

by buzz
http://www.thisoldtoilet.com
Posted by This Old Toilet at 6:30 AM No comments: 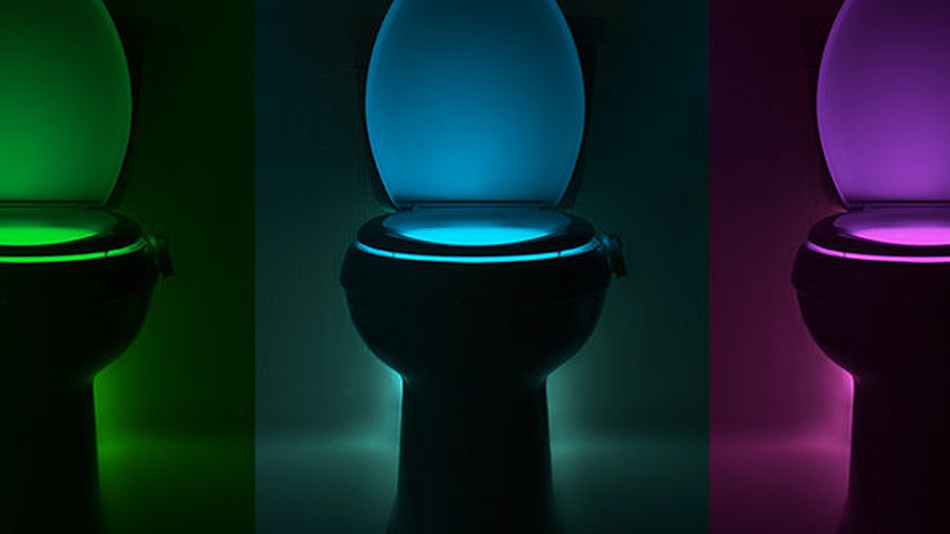 Nighttime trips to the bathroom don't normally elicit much thought. They probably should, since the bathroom's where some of the most accidents in the home happen. Ever fallen or gotten bumps and bruises during a late-night bathroom excursion? Exactly.


That was the line of thinking motivating entrepreneurs Matt Alexander and Mike Kannely, who came up with the IllumiBowl — a motion-activated toilet light that makes finding your way to and using your porcelain throne less fraught with late-night peril. If it sounds familiar, that's because it was featured on ABC's Shark Tank in 2016, during which Alexander and Kannely scored a seed investment in the company.
The IllumiBowl saw success on Shark Tank for the same reason it's remained popular years afterward: it's easy to use and well-designed. Simply set it to one of eight colors (or opt for a color-rotate light mode), and built-in motion sensors will automatically turn it on and off whenever you enter the bathroom. You also can enjoy ultimate customization with the three-stage dimmer — kind of like your own private light show.
On top of that, the Illumibowl is easy to clean and fights bacteria with special light technology, all of which is, of course, important for any toilet accessory. All of which makes it perfect for potty training... or simply set it out to add an extra decorative touch for party guests
source: https://mashable.com/shopping/deal-april-24-illumibowl-germ-defense-toilet-night-light-shark-tank/
by Team Commerce
http://www.thisoldtoilet.com