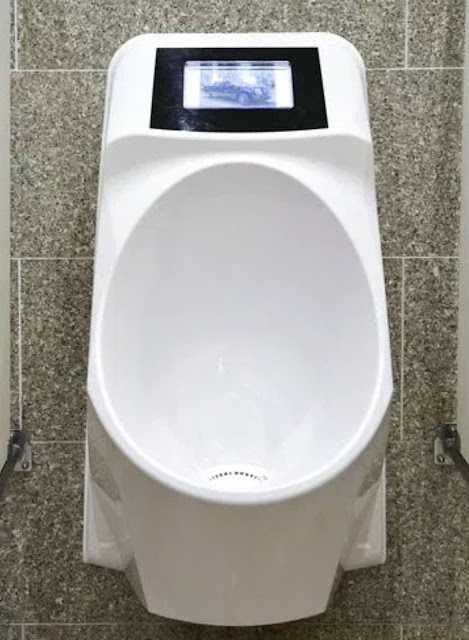 Mr. Friendly is a waterless public urinal that integrates a video screen to show you ads while you pee. This is just begging for "gamification." From the Dutch manufacturer:

Every gentleman knows that a toilet break is a moment of relaxation. This is when we have “time on our hands”. We seize that perfect moment with our unique Mr.Friendly urinal. Sponsors of environmentally friendly urinals are happy with that moment when they can display a nice video to introduce themselves.
As a location holder you can also use the built-in display. Communicate your message at a unique moment.

The latest in toilet jewelry 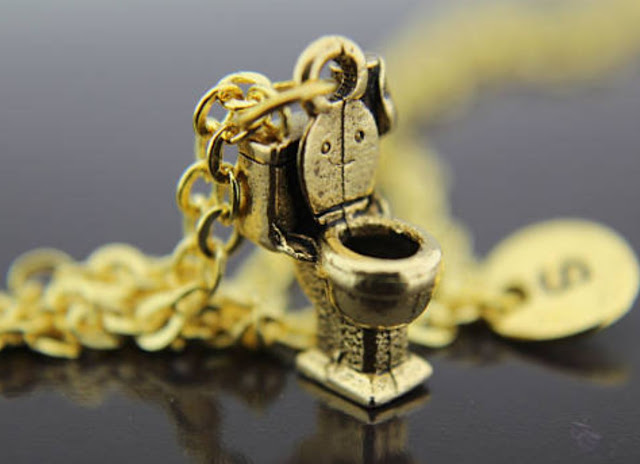 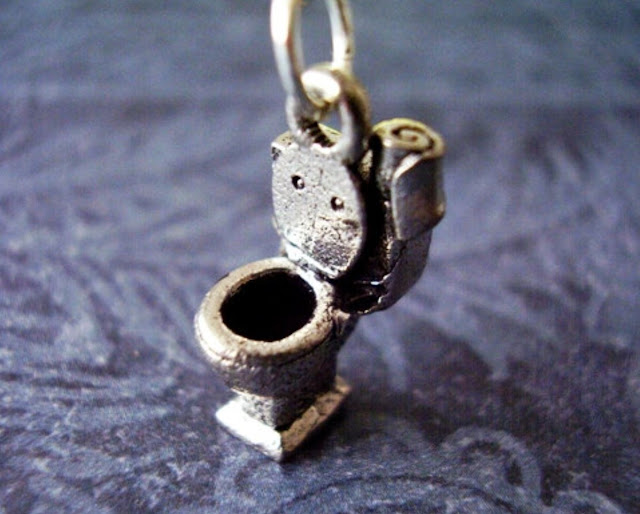 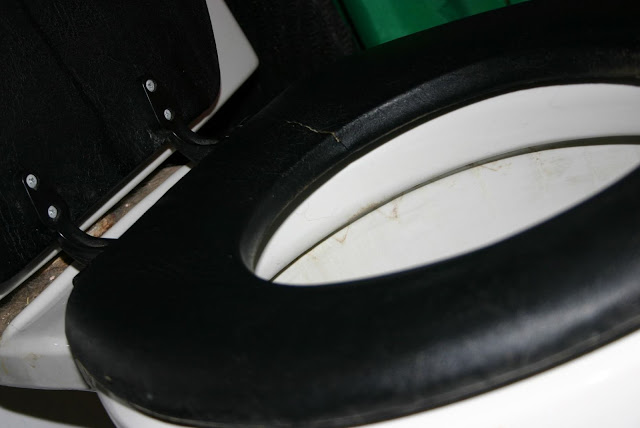 It’s uncomfortable, it’s embarrassing, and you’d really better fix it sooner rather than later. We’re talking about a loose, wobbly toilet. Fortunately, this is not a particularly difficult or expensive home improvement project to take care of. Whether it’s the base or the seat that is rocking and rolling, find out why and how to tighten a toilet.
WARNING: Before inspection or repairs, turn off the water supply valve and flush your toilet to drain water from the bowl.
Why you should tighten a loose toilet
Tightening a loose toilet isn’t rocket science; it’s a fairly simple fix, but whether you do it yourself or hire someone to take care of the problem, the important letters here are not DIY, but rather ASAP. Why? While a wobbly toilet is not dangerous to life and limb, it’s a warning sign that unless you take action, your toilet is likely to start leaking from the base in the near future. This type of leak is often difficult to spot, yet it can cause serious water damage to your bathroom floor — and eventually the subfloor as well (and possibly your downstairs neighbor’s unit, if you live in a condo building). As for a loose toilet seat? Well, that’s just plain uncomfortable for your family and guests.
How to tighten a toilet base
Check the mounting bolts. Pry off the two plastic bolt caps, located one on each side of your toilet base. (You may need a small screwdriver for this task.) See whether you can jiggle either of the bolts underneath with your fingers. If a bolt is loose, simply use a socket wrench to tighten the nut until you feel some resistance. (Beware of overtightening — you don’t want to crack the porcelain of the toilet itself.) A broken bolt, on the other hand, will have to be replaced, together with the wax seal between your toilet and the floor.
Check the condition of the flange. The mounting bolts attach your toilet to a flange (a sturdy ring of plastic or metal, which is bolted to the floor). Remove the bolts and check the flange. If it is metal and is just slightly cracked, you should be able to perform DIY repair with the help of an inexpensive semi-circular part called a super flange. When you position this piece on the cracked flange, you’ll give the mounting bolt a new hole to fit into. However, a plastic flange — or a metal one that is seriously broken or corroded — will need to be replaced. Remove the bolts and the damaged flange, and position the replacement flange flush with the floor. Reinsert the bolts and tighten each one, a small amount at a time, so that the new flange sits evenly.
Check the level of the toilet. Your rocking toilet may be due to uneven flooring or incorrect installation. The base of the toilet should be flush with the floor; if it’s not, try correcting the problem with rubber or silicone shims. For a more drastic situation, remove the toilet and reinstall it. (REMINDER: Turn the water supply off first.) Replace the wax seal if it is damaged and caulk with silicone. If the toilet is old and in bad shape, you might want to take this opportunity to find a plumber to replace it altogether.
How to tighten a toilet seat
While a wobbly seat is less problematic than an entire toilet that rocks, it’s still enough to give your family and guests a somewhat insecure feeling. For this, the DIY fix couldn’t be much simpler. Just tighten the bolts that attach the seat to the toilet by turning them clockwise — you probably won’t need any tools besides your fingers, but if necessary, use pliers to hang onto the nut while you turn the bolt with a screwdriver.
If you frequently suffer from the wobbly toilet seat blues, home improvement and hardware stores sell inexpensive, easy-to-use seat tightening kits.
source:  http://www.leavenworthtimes.com/lifestyle/20180329/networx-how-to-tighten-toilet
by Laura Firszt


We made the Los Altos Town Crier

Megan V. Winslow/Town Crier
Los Altos resident Gary Tjader, above, matches vintage toilet tanks with homeowners in need of a fix through his business, This Old Toilet.
Los Altos resident Gary Tjader has presided over a nationwide empire of obscure toilet parts, but you’ll only know of him if the worst has happened: that cracking shatter of porcelain hitting tile as a bathroom fixture meets its end.
His home base in Loyola Corners, a 1940s home converted into office space by a previous occupant, houses row upon row of tank lids organized by brand, model and color in a rainbow backyard array. Take a tour of the Kohlers, American Standards and Eljers and you’ll see the iconic Ming green of the 1960s blend into the spruce green and sunflower of the 1970s. His oldest lid dates back to 1915.
“I’ve been in plumbing material supply all my life,” Tjader said, noting a family enterprise stretching back to 1933, when his grandfather operated a business in San Francisco.
His grandfather’s wholesale plumbing supply persisted for decades, with Tjader’s father and then Tjader himself among its employees.
After the family sold the business, Tjader went to work as a manufacturer’s representative for kitchen, bath and plumbing products. He provided the interface among manufacturers, wholesalers and showrooms. But he also started a sideline in selling individual, hard-to-find parts at toilettanklids.com starting in 2003. He continued to work as a rep but because “the toilet business was growing” – a sentence one doesn’t often get to write – he stopped repping in 2011 and turned to vintage parts full time.
His business, This Old Toilet, begin as just a Web URL and a handful of pieces of porcelain.
“The internet was emerging, with bulletin boards where consumers posted questions and professionals posted answers,” Tjader said.
The forums ended up serving as an indirect way to solicit business, because he saw many queries for tank lids. He emailed one poster to ask which brand she was seeking, learned it was a brand he used to rep and realized that he knew a former customer with a few stray pieces still unsold. When the poster said she’d pay $100 for the lid, he tracked down that stray piece – which had since been sent to a salvage yard in San Jose – and the business was born.
Tjader began by picking through the heaps local plumbers would stack in their backyards. But sifting through disorganized piles proved inefficient. He began buying up pieces he knew would be popular, building an inventory of 2,000 lids at his peak. He estimates that now, when he’s less interested in scavenging and hauling, his stock rests at approximately 1,500.

The it’s-trash-’til-you-need-it paradox of vintage parts became clear as he had to triage pieces that might sell for $150, or get thrown out, depending on the serendipity of the right buyer calling at the right time. Rejected spares don’t actually get trashed, but rather dispatched for concrete demolition, repurposed as a base rock product.
“What really sells is toilets in the 15- to 25-year age range, when they are still in service but have aged. As inside parts begin to leak, people are going inside to fiddle and fix. To do that, you have to take the tank lid off – and there’s an error rate,” Tjader said, alluding to the lid catastrophes cataloged on his site.
He’s collected a long list of funny stories about how toilet tank lids get broken. Contractors burst through skylights and break their fall on a toilet. A set of 5-year-old triplets pleads the fifth and never reveals what exactly transpired in the bathroom.
“If you have a 5-year-old living with you, show them what’s inside the toilet tank before they try to look on their own,” he advises in the “Toilet Trivia, Tips & Myths” section of his website.
His sideline in toilet tank lids began with a few strays he picked up speculatively in advance of receiving an order, but grew into a supply of lids, tanks and toilet seats at his office and in a Mountain View storage space.
A behind-the-scenes web of toilet entrepreneurs moves the aging parts around the country as friendly rivals, passing along customer requests or parts outside of their chosen purview. Tjader’s typical sale averages approximately $130, including $25 or so in shipping.
He’s received some national fame as a source for desperate New Yorkers, who face notoriously peculiar plumbing setups, where if a toilet can’t be repaired, replacement leads to thousands of dollars in remodeling costs.
“I get jokes about my website, that it looks like it was built in 1997. Well, it was,” he said of the old-school long scroll through hyperlinked text that makes up This Old Toilet’s web presence.
Before the days of carefully calibrated search engine optimization, his URL alone was enough to appear on the front page of search engines “back in the day.” Today, he gets business through referrals from manufacturers who know he might help a customer they can’t. All he needs to know is brand, model and color – but that last element proves an area of great scientific and practical curiosity. It would have been ideal if manufacturers embedded some form of color reference on their hardware, but they didn’t.

WHAT’S IN A GREEN?

“People think they can describe it to me and we’re going to figure it out – ‘It’s green, but it’s got a little gray in it,’” Tjader said ruefully, likening it to other nuanced sensory distinctions. “Describe to me the difference in taste between an orange and tangerine.”
He uses swatches of paint chips, historical records of what colors manufacturers used in what years and guesswork to match colors over the phone and email. In the 1920s, a major manufacturer like Kohler offered only a handful of colors, many themed on the old standby of ivory porcelain. Throughout the 20th century, new colors joined the list, with allusive names like “Peachblow,” “Suez tan” and those mid-century classics, harvest gold and avocado.
“In the ’70s, everybody got infatuated with dark colors. Espresso was all the rage. But dark shows everything,” Tjader said of the impracticalities of maintaining a chocolate color scheme in a world of white cleaning products, soaps, toothpastes, dust and nicks.
Colors come, go, and return renamed as you scroll through the historical listings. The subtle differences between “biscuit” and “almond” have provided “tremendous confusion,” Tjader said, particularly because both have overlapping dates and product lines.
“It’s kind of like being a detective, which is fun,” he said.
In his chronicle of “stories from experienced customers,” he related the surge in springtime purchases when college students move out and have to replace what they’ve destroyed, and homeowners crack their lids in the midst of a cleaning frenzy.
In 2007, he got a call from a homicide detective seeking assistance in an investigation – a toilet tank lid was, in fact, the murder weapon.
For more information and toilet tales, visit toilettanklids.com.

source: https://www.losaltosonline.com/news/sections/business/183-business-features/57435-toilet-impresario-has-gleaned-tales-from-the-tank
by Eliza Ridgeway
Posted by This Old Toilet at 7:00 AM No comments: