A Norwegian hunter took aim at a moose, but missed and accidentally hit a man sitting on the toilet in a nearby cabin on Thursday, police said.
The bullet whizzed past the animal, pierced the wooden wall behind it and struck the man, in his seventies, in the stomach, the force told public broadcaster NRK.
The victim was flown by helicopter to hospital but his injury was not life-threatening, said the policeman who led the investigation, Anders Stroemsaether.
The hunter was taken in for questioning in Hvaler district, about 74 miles southeast of the capital of Oslo, said the force. The moose escaped unscathed
source: Reuters
http://www.thisoldtoilet.com
Posted by This Old Toilet at 9:11 AM No comments: 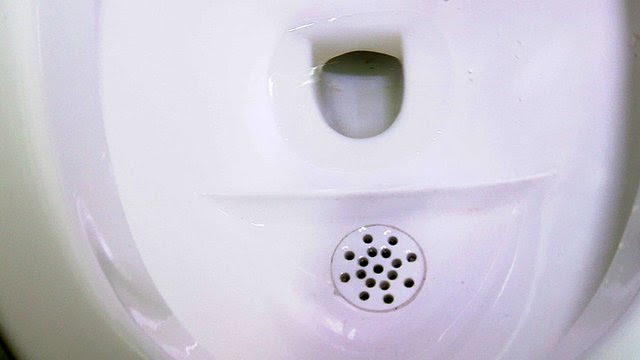 Researchers at Singapore's Nanyang Technological University (NTU) have been working on ways to make towns and cities more sustainable by taking waste from housing and turning it into energy.
The team created a new type of toilet system which turns human waste into biogas - which can be used for cooking and generating electricity - and biodiesel.
source: http://www.bbc.co.uk/news/technology-24651214
http://www.thisoldtoilet.com
Posted by This Old Toilet at 9:04 AM No comments: 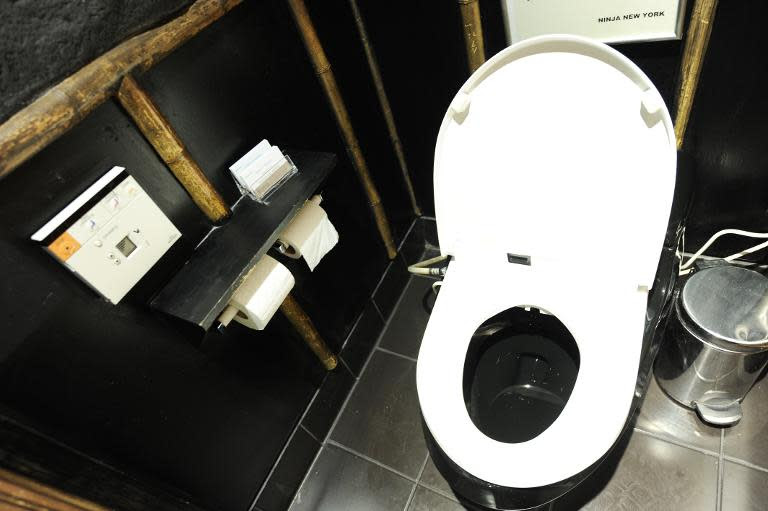 A New York man was seriously injured when a toilet exploded in his face after he pulled the handle to test the water pressure in his Brooklyn apartment.
Michel Pierre sustained shrapnel wounds from flying shards of porcelain that pierced his face, arms and legs, and required 30 stitches, his lawyer told AFP.
The 58-year-old information technology specialist is now so fearful that he uses a rope to flush the toilet from behind the bathroom door at a safe distance.
"Those fears are part of his damages," said his lawyer Sanford Rubenstein. "Clearly toilets are supposed to flush, not explode."
Three other tenants were also injured by what the Daily News website dubbed "the porcelain bomb."
The website said Pierre was briefly knocked unconscious and covered in blood by the explosion on October 2 in Brooklyn, an increasingly well-heeled part of New York.
"It sounds silly but I'm still scared," Daily News quoted Pierre as saying. "Maybe someday it goes away but right now I'm in pain."
Rubenstein said a lawsuit would be filed against the management company of the building so that a jury could decide how much compensation Pierre should be paid.
The full cost of his medical bills and whether he needs plastic surgery are not yet known, Rubenstein said.
"Obviously there is a serious problem in the building," the lawyer told AFP.
The water had been turned off that day to allow for maintenance work in the 16-story building, which was built in 1964 and contains 275 apartments.
Theresa Racht, a lawyer for the co-op board, told AFP that it appeared to have been a freak accident.
"This is a horrific incident. Everybody feels terrible that such a thing could have happened," she said.
"It certainly makes me think twice about flushing the toilet when the water's been turned off."
She said four toilets in the building exploded but that no particular evidence of wrongdoing had yet been found.
"It has never happened before and certainly nothing has happened since," she said.
"The only conclusion anybody has reached -- and they're still investigating -- is that there was a buildup of air pressure in the pipes so that when it came back on, the pressure was just pushed through the pipe and caused the explosion."
"This could be very well what we call a true accident."
source: http://news.yahoo.com/york-man-hit-exploding-toilet-214358419.html
http://www.thisoldtoilet.com
Posted by This Old Toilet at 7:59 AM No comments:

We all use our smartphones and tablets in the bathroom, but there's an unwritten rule that you do it discreetly, and don't really brag about touching your device while touching your... well, you get the idea. So while on one hand it's easy to be disgusted by CTA Digital's toilet paper/iPad stand, on the other we're probably all quietly reaching for our credit cards.
Even at $45 the iPad Pedestal Stand is a steal since it keeps the two most important things we've come to rely on in the bathroom in easy reach. And a gooseneck mount means it's easy to position your tablet at the optimal viewing angle. The only thing missing is a much needed splashguard, and a bottle of touchscreen-friendly disinfectant. [CTA Digital via Gear Diary]

http://www.thisoldtoilet.com
Posted by This Old Toilet at 7:53 AM No comments:

The Magic Restroom Cafe in Southern California is toilet-themed.

If all goes well, this restaurant's business will be in the crapper.
The Magic Restroom Café in Southern California has had a successful "soft opening" according to their Facebook page, and plans a grand opening soon.

A dessert served in a miniature toilet bowl.

PHOTOS: BIZARRE RESTAURANTS AROUND THE WORLD
The City of Industry restaurant is toilet-themed, as guests sit on toilet-style stools and are served food in miniature toilet bowls, according to a report from Los Angeles' KTLA 5. Yelp reviews describe the décor as including urinals and toilets along the wall, and shower fixtures near some of the tables.

Urinals and toilets make up the decor.

The inspiration comes from a place called the Modern Toilet Restaurant in Taiwan, reports the Los Angeles Times. YoYo Li, a first-time restaurateur from China, decided to open one in the United States due to the popularity of such cafes in Taiwan, according to the Times, which describes the place as "rather crude, but it's all in good humor."
RELATED: BEYOND BIZARRE: THE WORLD'S WEIRDEST RESTAURANTS

The conept of toilet-themed eateries has been successful in Taiwan.

http://www.thisoldtoilet.com
Posted by This Old Toilet at 7:29 AM No comments:


We can understand having a little fun with the bathroom decor, but there are more eyebrow-raising options out there than we previously thought possible.
Check out some of the most ridiculous toilet seat covers we found on the web below. Which ones would make you pause the longest before sitting down? 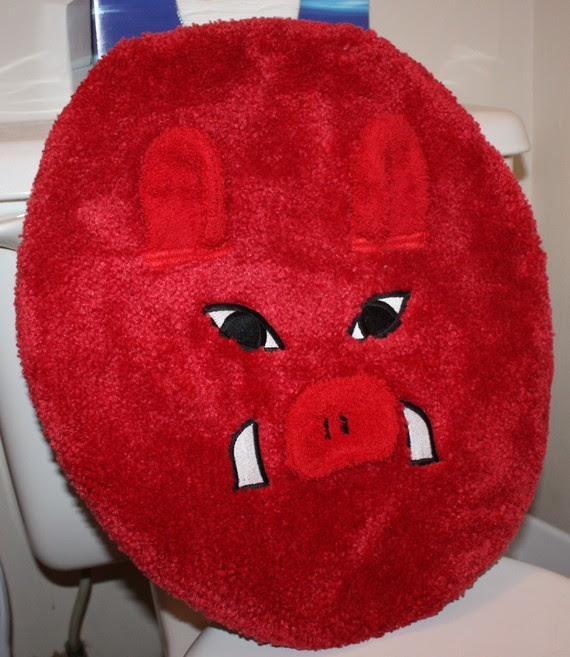 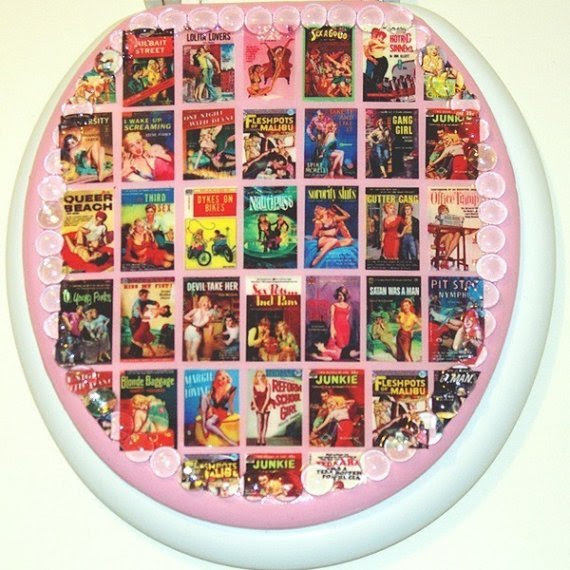 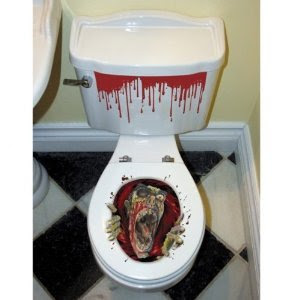 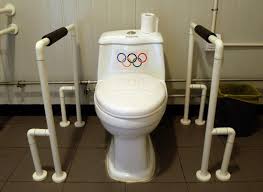 Politically speaking: The White House has 30 bathrooms; the Pentagon uses about 636 rolls of toilet paper per day.


Give the ladies more room: Women spend 60 percent more time in the bathroom than men, and yet most public washrooms have the same number of stalls for both men and women (so that's why the men's room is always empty!).

http://www.thisoldtoilet.com
Posted by This Old Toilet at 8:18 AM No comments: 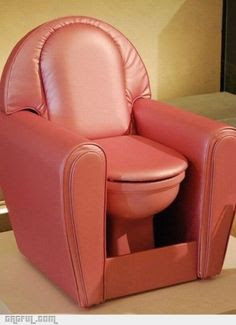 Scientists have revealed the filthy secrets that lurk in PC keyboards and smartphones, with one in six mobiles contaminated with faecal matter.

Researchers have discovered that computer keyboards contained 7,500 bacteria per swab - much more than an average toilet seat, which has 5,400.
John Norris of mouldcheck.co.uk told the Sun on Sunday: "It's no surprise - we eat at our desks, drop all sorts of things on our keyboards and rarely wash our hands before we start using the computer.
"There are products out there to clean your keyboard, but few bother."
Microbiologist Dr Peter Wilson said a keyboard was "a reflection of what is in your nose and gut".

A surprise finding was that handbags contain a high level of bacteria, including E. coli and even traces of faeces.

Health experts warn that failing to wash hands properly can lead to diarrhoea, vomiting, food poisoning, flu and the spread of MRSA.

Which? Researchers also took swabs from 30 smartphones, tablets and keyboards. One iPad had 600 units of Staphylococcus aureus, which creates toxins that can lead to food poisoning.
James Francis, the microbiologist who carried out the resaearch, said: "A count of 600 on a plastic device of any sort is incredibly high. It indicates that some people don't wash their hands a lot."
The results point to today's busy lifestyles, such as snacking while typing and rushed toilet breaks. More people are also taking their must-have tech gadgets with them into the bathroom. A recent survey showed that one in six mobile phones is contaminated with faecal matter.
Health experts warn that failing to wash hands properly can lead to diarrhoea, vomiting, food poisoning, flu and the spread of MRSA.
Media regulator Ofcom suggest that consumers are so addicted to smartphones and tablet computers that over one in ten - 11% - now view video content on a device such as the iPad in the bathroom. It's estimated that around 20% of 18-24 year-olds do so on a regular basis.
Keyboard users should tip them upside down and shake them to "dislodge any old food crumbs, dust and skin flakes".
TOP PLACES WHERE BUGS LURK
source: http://www.ibtimes.co.uk/articles/511734/20131006/smartphones-germs-faecal-matter-pc-keyboards.htm
by Fiona Keating
http://www.thisoldtoilet.com
Posted by This Old Toilet at 5:55 AM No comments:


Art is where you find it. And it can be found in the strangest of places - even on a toilet seat lid. The San Antonio museum that's leaving art lovers bowled over.

http://www.thisoldtoilet.com
Posted by This Old Toilet at 5:53 AM No comments: 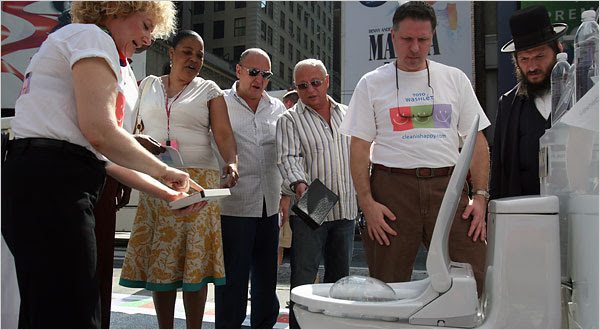 Kitra Cahna for The New York Times
CURIOSITY Lenora Campos, left, demonstrates the benefits of the Toto Washlet to passers-by in Times Square; a plastic bubble on the bidet seat shields them from spraying water.
LOUIS FALSETTI, a retired New York police captain, comes across as an average American, with normal American tastes and habits. But last year, not long after his 58th birthday, he discovered the Toto Washlet, a Japanese-made bathroom fixture that has not caught on in the American market, largely because of the change in behavior it asks of consumers. And unlike most of his countrymen — or his wife, who balked at the price of the model the couple ended up buying, $1,248 — he was immediately smitten. 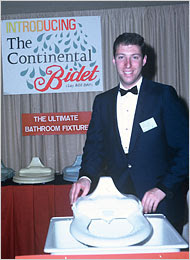 MR. BIDET Arnold Cohen displays his own bidet seat at a trade show in 1964.