We have seen the future promise of the French toilet, and it lives in this gracious hillside village.
Beside the tourist office. Two doors from the bakery. Next to a park, le Jardin Jean Moulin. Across from a beautiful view of the surrounding countryside. And behind a bright red door with a slightly ominous warning that no one under 10 years old should enter unaccompanied.
No question. This toilet is a feat of modern engineering in a land that, in the realm of flushability, needs to bend a bit more toward the contemporary. Put another way, French toilets haven't quite caught up with the 21st century. ... Perhaps you are aware that this is a land of many medieval ruins?
But first, some context. Last Wednesday, cruising the slow lanes at last, we stopped at Bar des Amis, a quite lovely little place in the square of brotherhood (Place de Fraternité) in the alluring Luberon mountain village of Saint-Saturnin-les-Apt. We had coffee and a sandwich in the noon sun, and an hour drifted by.
Kathy left, entered the bar and returned with this assessment.
"Signs of progress," she said. "The light operates by motion sensor."
You know, in the bathroom. This is good; it shows environmental awareness. Unfortunately, there was no toilet seat, no toilet paper, no soap and no hand towels. The town's environmental consciousness, I should note, extended from timer lights to dogs. A cartoon of a dog and owner across from the bar showed the dog's thoughts: "My master is kind," read the cartoon bubble. "He picks up my poop."
But even if some French villages are now encouraging owners by dispensing doggie bags in public, French public bathrooms in 2014 remain a strictly "carry-your-own" culture, though we have not yet stooped to carrying around our own toilet seat. That would be a bit gauche, don't you think?
Now, however, Ménerbes offers hope. We arrived there on Thursday. It's a rather posh mountain town made famous by author Peter Mayle when he wrote about his adventures fixing up a house nearby in his charming book A Year in Provence.
Ménerbes has more than its share of renaissance-era walls renovated on the inside, I suspect, into rather sumptuous contemporary castles. It has a mayor's office with a full array of flags in front. It has narrow, cobblestone streets and an ornate clock tower. All tasteful and appropriately old.
Then we arrived at the public bathroom. In English and French, it explained that one must go inside and lock the door. Once inside the space-age toilet-capsule, one does one's business. Then the sink, with assembly-line efficiency, squirts soap onto outstretched hands, then water, then warm air for drying. And after visitors leave their toilet cocoon? Why, then the "occupied" light flashes red again and the unit groans into a frenzy of self-cleaning.
Worried about a malfunction? Don't bother. Every 15 minutes, the door opens automatically.
I mean, progress really is an understatement here.
"You can't knock their toilets anymore," Kathy chided me. "It disinfects and everything."
It does disinfect. Except something was not right: The village of Ménerbes, perhaps by mayoral decree, had removed the toilet seat inside.

"...I received the tank lid in excellent condition. The description stated that it was a blemished lid and to my surprise, the blemish was hardly noticeable! Our lid has been broken for at least 10 years and now our toilet is like new!!!" (Crane 4-15-001 tank lid, White)

"Cool Web site! I was about to embark on a plumbing nightmare. Now I'm taking my new toilet back to Home Depot. This will be MUCH easier. You are a God!" (Universal Rundle 4481/4490 tank lid, White)

"I appreciate your help in getting the right lid. It's a lot less hassle than putting in a new toilet." (1973 Norris tank lid White) 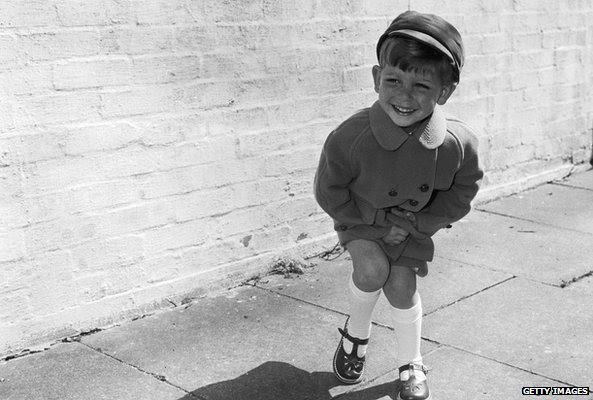 An app that allows people to charge members of the public to use their private toilet is being tested at the New Orleans Mardi Gras.
AirPnP - inspired by AirBnB, a service for renting out your property to travellers - said it offered a "legal alternative" to urinating in public.
Willing "entrepreneurs" can charge a price to use their toilet, and must add details such as cleanliness and toilet paper thickness.
Users can rate their "pee experience".
The founders said the site was inspired by the yearly trouble the founders had when attending New Orleans's Mardi Gras festival, which has been running since 1837.
"During the Mardi Gras they routinely experienced the pain point of having no place to legally urinate," the Airpnp "About us" page explains.
"This problem is often solved by using what is known as a 'rogue pee'. 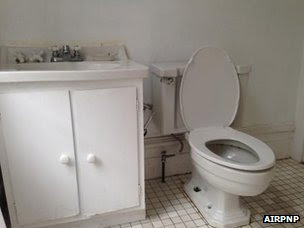 One advertises "porcelain paradise"
"If caught the person faces a weekend in Orleans Parish Prison. Yet this stiff penalty doesn't stop thousands upon thousands of 'rogue pees'. This clearly demonstrates the demand for a legal alternative."
'Porcelain paradise'

Almost 2,000 people have signed up to use the app. At the time of writing, about 20 toilets had been added. All are in New Orleans, except one posted in Budapest, Hungary.
"Clean bathroom in our uptown home," reads one.
"Toilet paper and hand soap provided, of course. Large mirror for checking yourself out."
Another advert offers a "porcelain paradise" just off the main parade route, for $3 per visit.
The advert reads: "Imagine, you, gazing at passing floats. Now imagine you gazing at more floats just a few minutes later. Because that's all it will take for you to unleash your bowels in our frequently cleaned porcelain paradise."
The app's founders have a history of creating public-service-minded apps.
One of them, Travis Laurendine, has been recognized by the White House for efforts in "hacking" for a civic cause. 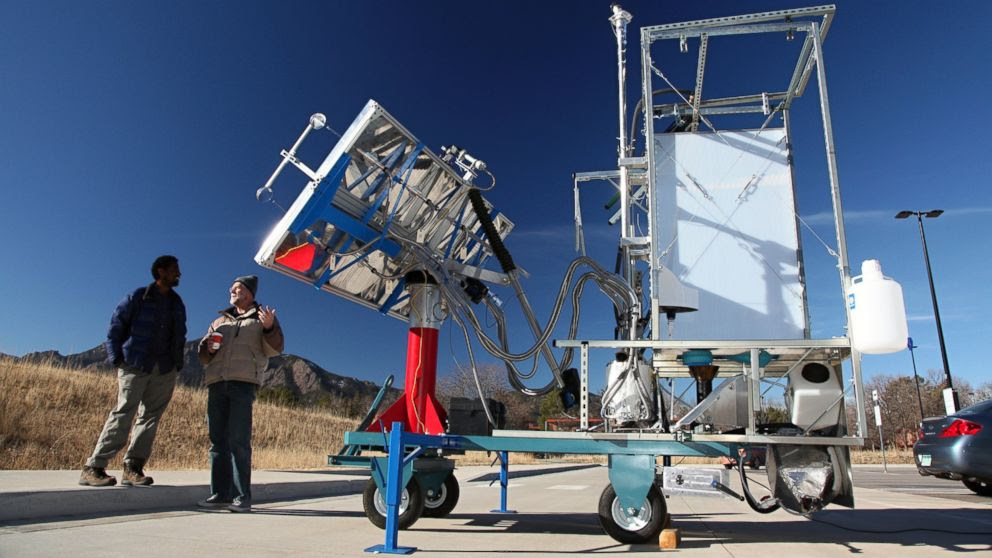 Karl Linden's toilet can turn a person's waste into something much more useful.
Courtesy University of Colorado
Most people probably don't think of recycling the things they flush down the toilet. Karl Linden, a professor of environmental engineering at the University of Colorado, thinks that doesn't have to be the case.
Thanks to a couple of mirrors and fiber-optic cables, Linden is turning feces and urine into biochar, a small black chunk of material that can be used like a charcoal briquette.
"It can be used for cooking," he told ABC News. "Or you can put it in the soil so that it better retains nutrients. There's a lot of agricultural benefits."
Though the toilet produces something useful, that aspect is secondary to Linden's bigger goal of creating a usable toilet for countries that lack access to power and sewer pipes. "A lot of the pit latrines fill up and then you get sanitation problems," he said. "We're looking to create a toilet that makes the waste safe to handle."
New Toilet App Helps Prioritize Your Pit Stops
The toilet relies on eight mirrors that focus sunlight onto a 1-centimeter wide square. From there, the focused light passes through bundles of fiber-optic cables to heat a reaction chamber up to over 300 degrees Celsius. The heat sterilizes the waste and dries it out, resulting in the biochar.
Though the toilet is currently designed for a single household, Linden said that future versions could be made to accommodate more people in order to be more cost effective. "It's pretty hard to make a toilet that does all the things you want it to do for a low enough price point," he said. "People that you know, like your extended family, could all use the same toilet block."
In addition, even though the toilet's sanitation is powered by the sun, that doesn't mean that you can't use it when the sun goes down. The toilet features two separate compartments that can be swapped in and out. "While one fills up for 24 hours, the other part gets solarized," said Linden. "We need about four hours of sunlight for treatment."

Better, Brighter, and Blinkier than ever!

In 2013, we're bringing back upgraded versions of our two favorite beacons from last year-- Welcome to Fabulous (thanks in part to an honorarium grant from Burning Man!)  as well as The Toilet Bowl lanes.  And we have a NEW beacon for 2013-- Twisted Bristles-- a 15' tall toilet brush with bristles that light up!  Also new for 2013, we'll have special deep-cycle-battery-powered safety lights on the installations to ensure they stay visible to explorers and art cars alike, even when the generators don't want to cooperate.

Welcome to Fabulous.  Our flagship beacon from 2012 is back with a fresh coat of paint, plus a new professional marquee around its edge.

The Toilet Bowl.  Everyone's favorite pastime while waiting for your friends at the potties is back, featuring upgrades to the ball return and new super-blinky full-color programmable LED light strips down the lanes that are sure to amuse, if not improve your game.

Twisted Bristles.  Imagine a 15-foot tall toilet bowl brush with over 1200 bristles made of 18" acrylic rods, backlit by LEDs dancing in a variety of blissful patterns.  That's Twisted Bristles! The prototype in the Beacon laboratory looks amazing-- this may be everyone's new favorite.