The new City Hall building in the Phoenix suburb of Chandler, Arizona comes with something that has a lot of people wondering who does it. The Restroom signs says 'Do not drink out of the urinals and toilets'.
Now I have seen my dog drink out of the toilet, but then the sign wouldn't be of any use to him as he can't read.
Just how thirsty would you have to be to consider such a thing?
May

be it is common practise in America - which could explain the fact that they use more breath fresheners and
have their teeth whitened more than any other Nation?
As for most of us, we will resist temptation and stick to tap water - well, all except for Maureen (what is that slurping sound?) - she always was adventurous!
source: http://www.wte-ltd.co.uk/blog/
http://www.thisoldtoilet.com
Posted by This Old Toilet at 6:00 AM No comments:

Has your toilet lost some of its flushing power? Using a small mirror, you can check the series of holes that sit under the rim of the bowl. These tiny holes, known as flush passages, shoot water into the bowl each time the toilet is flushed, but sometimes they become plugged up with mineral deposits or grime. To enhance flushing power, poke each hole clean with a length of wire clothes hanger. After cleaning all the passages, flush the toilet to remove loosened deposits. If necessary, repeat the process.


http://www.thisoldtoilet.com
Posted by This Old Toilet at 6:00 AM No comments:

A new generation of toilets may one day make toilet paper - and the need to put one’s hands anywhere near the unspeakable - seem like chamber pots and outhouses: outdated and somewhat messy throwbacks reserved for camping trips.

NEW YORK — Every so often a revolution transforms something truly basic, rendering the status quo somewhat, well, primitive.
First came covered sewers, then indoor plumbing and flush toilets. Now, one bathroom at a time, another major shift in toilet hygiene is quietly underway. A new generation of toilets may one day make toilet paper — and the need to put one's hands anywhere near the unspeakable — seem like chamber pots and outhouses: outdated and somewhat messy throwbacks reserved for camping trips.
Unlike traditional toilets, the high-tech version washes from behind and — if desired — in front with water. Better models allow for temperature, direction and pressure control, and have retractable spritzing wands and automatic driers as well. The best feature warm seats, automatic motion sensors to raise the lid, buttons to raise the seat, nightlights, self-cleaning mechanisms, music to mask unpleasant sounds, deodorizer spritzers and other conveniences.

This photo shows TOTO Washlet high tech toilets in the TOTO showroom in the Soho neighborhood of New York.

"Paper just distributes the problem," said Lenora Campos, a spokeswoman for Georgia-based Toto USA. Toto, the Japanese company that pioneered the modern electronic toilet seat, has sold 34 million of them globally. "We wash most things with water and wouldn't dream of wiping a dish or anything else with a piece of paper and calling it clean. So why should personal hygiene be any different?"
Toto began marketing the Washlet in Japan in 1980. Now 74 percent of Japanese households have toilets of the high-tech persuasion, making them more common there than home computers.
The concept of electronic toilets that cleanse with water — widely known as bidet toilets or Washlets — has spread internationally over time, and dozens of companies around the world, including Inax, Brondell and Kohler, are producing them.

Although most popular in Asia, basic versions are becoming standard in much of the Middle East and South America, where cleansing with water has long been preferred to paper. They are finally becoming more popular in Europe, where "boudoir paper" was introduced in the 19th century, and in equally paper-centric North America.
They have been a long time coming.
In the U.S., "bidets were always seen as European, and an oddity of the French," said Rose George, author of "The Big Necessity: The Unmentionable World of Human Waste and Why It Matters" (Metropolitan Books, 2008).

The NEOREST 750H introduces the most complete bowl cleansing system available by synergizing its patented flushing and cleansing technologies, to rid the bowl visible and invisible waste.

In addition to general squeamishness about discussing the way we clean ourselves, some in the U.S. worried about the high-tech toilets' requirement that a grounded electrical outlet be nearby, or thought the early control panels made the toilets look clumsy.
That said, the predecessor to modern high-tech toilets was actually invented in the United States, by Arnold Cohen of Brooklyn, who patented a pedal-operated seat he'd designed as a sort of sophisticated sitz-bath to help his ailing father. He founded the American Bidet Company in 1964, marketing his product as an "American way to bidet" and "the first wash and dry toilet." But the subject was considered too vulgar for ads.
"I installed thousands of my seats all over the suburbs of New York, and we had offices all across the country," said Cohen, whose company still exists. "But advertising was a next-to-impossible challenge. Nobody wants to hear about Tushy Washing 101."
The place where his invention really took off was Japan. "I licensed to the Toto company and sent container after container to Japan," said Cohen, whose patent later expired

source: http://www.nydailynews.com/news/national/new-high-tech-toilets-require-hands-paper-article-1.1710437
by the associated press 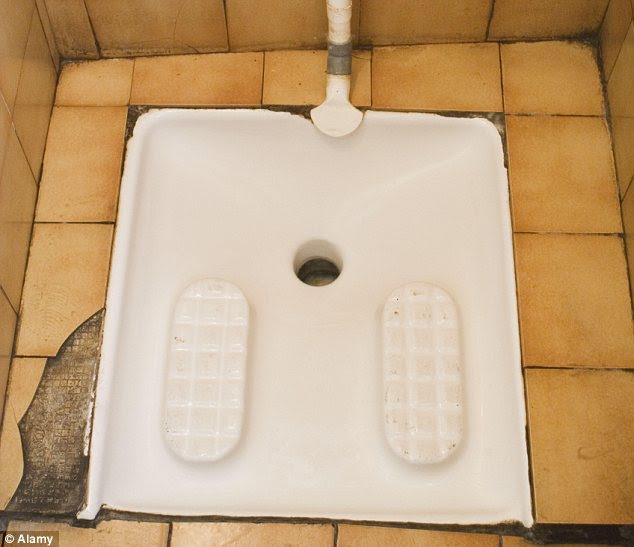 Continental: A squat toilet has been installed in a DHL warehouse in Swindon (file photo)

The distribution centre in Swindon, which transports goods for B&Q, has spent thousands of pounds on the new facility, according to The Sun.
Managers had previously installed signs instructing employees not to squat on the toilet.

A source told the paper: 'Staff have been fed up with the toilet seats breaking and workers leaving a mess.'

DHL did not respond to a request for comment. 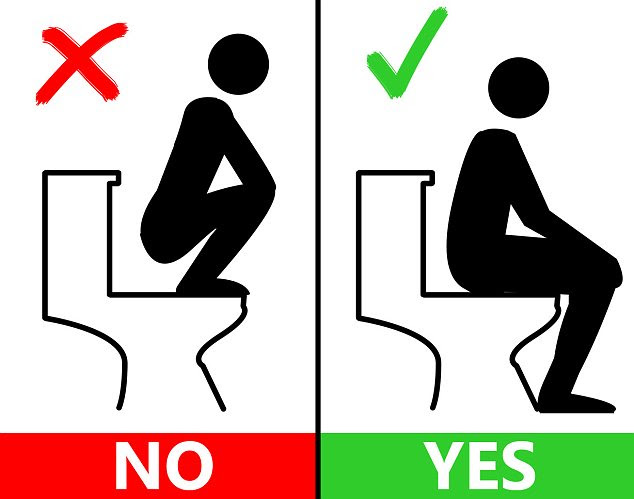 Warning: Managers apparently installed signs instructing employees how to sit on the toilet

Squat toilets are rarely seen in the UK despite their popularity in many other countries around the world.
British tourists in France frequently complain that only 'hole-in-the-ground' facilities are available in restaurants and service stations.
And in some Asian countries, such as India and Japan, British-style toilets were virtually unknown until relatively recently.
However, squat loos may be set to gain in popularity in Britain, thanks to doctors who claim that the squatting posture brings health benefits.
Some medics believe that squatting while going to the toilet is a more 'natural' position, and could protect against disease.

Posted by This Old Toilet at 8:54 AM No comments: