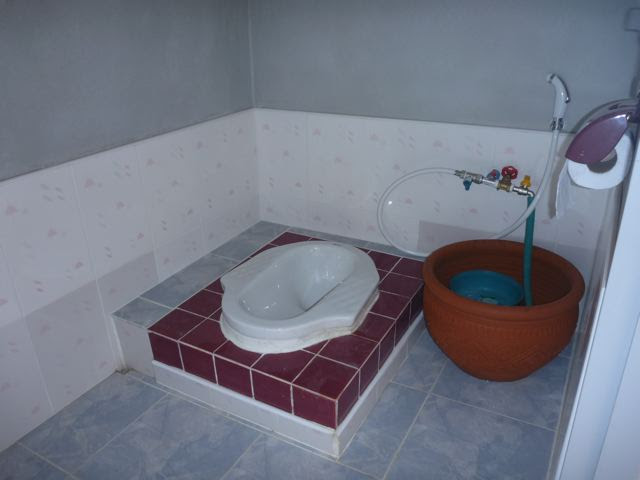 IN addition to eradicating polio in India and starting the personal computer revolution, the Seattle Superman of our age has managed to make going to the bathroom a cause célèbre. Five years ago, if I’d told people I worked on toilets, they would have surely assumed I was a plumber. Now, they exclaim: “Oh! Isn’t Bill Gates into that?”

More than one-third of the world’s population, approximately 2.5 billion people, doesn’t have access to a toilet. The Gates Foundation and a handful of celebrities like Matt Damon deserve credit for putting this sanitation crisis on the map.

The trouble is that the Gates Foundation has treated the quest to find the proper solution as it would a cutting-edge project at Microsoft: lots of bells and whistles, sky-high budgets and engineers in elite institutions experimenting with the newest technologies, thousands of miles away from their clients.
Just consider some of the parameters of the Gates Foundation’s first Reinvent the Toilet Challenge: Create a “practical” toilet that is suitable for a single-family residence in the developing world. Make sure it takes in the bodily waste of an entire family and outputs drinkable water and condiments, like salt. And while you’re at it, make sure that the toilet is microprocessor-supervised and converts feces into energy. And all this has to cost just pennies per person per day. That’s some toilet.


The winner of last year’s contest invented a solar-powered toilet that converts poop into energy for cooking. Impressive — but each one costs $1,000.
Other models boasted membrane systems, treatment of fecal sludge using supercritical water oxidation (heating water to 705 degrees Fahrenheit, or 374 degrees Celsius, then injecting oxygen) and hydrothermal carbonization (oxidizing feces at a high temperature and high pressure while under water).
High-tech toilets are exciting, but even the Gates Foundation has admitted that “the economics of such a solution remain uncertain.” In plain English: No one can afford them.
They are beyond impractical for those who need them most: the residents of slums in countries like Haiti, Indonesia and Bangladesh, where people make between $1 and $5 per day.
Just imagine the fate of a high-tech toilet in one of these communities. What happens if the unique membrane systems get clogged? Or if the supercritical water vessel or the hydrothermal carbonization tank leaks, or worse, explodes? Or what if one of the impoverished residents realizes the device is worth more than a year’s earnings and decides to steal it? If the many failed development projects of the past 60 years have taught us anything, it’s that complicated, imported solutions do not work.
The people I’ve met in countries like Peru, El Salvador and Haiti tend to be subsistence farmers in the countryside or residents of big-city slums who do odd jobs to make ends meet. They are survivors. They make use of what they have, and are often very good at fixing things. But don’t ask them to become industrial engineers overnight.
When I listen to Mr. Gates talk toilets, I think of Juana, who lives in Belén, Peru, a city of 65,000 on a tributary of the Amazon River. Her neighborhood is under water half the year. During the other half, the drainage ditches are filled with excrement and rats.
When Juana needs to relieve herself, she walks on a narrow plank for about 30 feet until she arrives at her bathroom — four rotting wooden posts wrapped with a tarp. She stands, precariously, on two narrow slats perched above a ditch and does what she needs to do. She also knows that her kids play nearby and worries about their getting sick, since the waste goes directly into a stream.
Poor sanitation contributes to 2,000 childhood deaths from diarrheal diseases every day. Unfortunately for Juana, and the millions of people who live on marginal, waterlogged land, there are no cheap solutions available. What they need are the kind of toilets that they can buy or build with a few weeks’ savings.
Ecological toilets that use natural composting to break down waste are simple to construct, waterless and are easy to fix. This is the go-to toilet for cottage owners in America who live too close to the water to have a septic system.
The only problem is they’re too expensive, with price tags of over $1,000. In Haiti, an organization called SOIL has successfully brought low-cost composting toilets to over 20,000 people, and my organization is working on developing a more affordable version.
Even simple solutions like the Peepoo bag, which inexpensively (less than 2 cents per bag) sanitizes waste before turning it into fertilizer, are huge improvements. They can also be critical in saving lives after natural disasters.
If we embrace these low-tech toilets, we’ll be on the right track to getting 2.5 billion people one step closer to a safe, clean, comfortable and affordable toilet of their own. That’s something worth celebrating this World Toilet Day.

http://www.thisoldtoilet.com
Posted by This Old Toilet at 5:00 AM No comments:


NO wonder they are called conveniences. Flush toilets swirl human waste down the drain quickly and neatly. But the convenience comes with a rising price for all that follows the flush — a cost that is often paid by municipal water and sewage treatment systems. 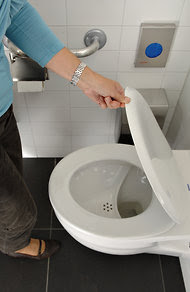 A new model at Eawag, the Swiss institute, that simplifies waste water management.
Enlarge This Image

Katherine Foxon, right, a chemical engineer in South Africa, with Bill Gates, left. In a new competition, the Gates Foundation is challenging researchers like her to create inexpensive toilets for use in areas without access to traditional water systems.
Now some groups are rethinking the venerable technology of the flush toilet, particularly for regions that lack such systems or for places where waste water treatment plants, many of them aging, are overburdened by the demands of fast-growing populations.
The Bill and Melinda Gates Foundation has begun a“Reinvent the Toilet” competition and awarded $3 million to researchers at eight universities, challenging them to use recent technology to create models that needn’t be connected to sewers, or to water and electricity lines, and that cost less than pennies per person a day to use. Later prizes will include financing for one or more winning prototypes to be tested and produced commercially.
“The present toilet is a 19th-century device that does not meet the needs of a vast part of the world’s population,” said Frank Rijsberman, an executive at the foundation. Instead, he said, about 2.6 billion people without access to sewer-linked systems must use simple latrines, holes in the ground or just the nearest available spot — a situation that can lead to many health problems, like acute childhooddiarrhea.
One of the new toilets being financed by the foundation is a compact chamber that runs on solar power from a roof panel and uses built-in electrochemical technology to process waste.
“We can clean the waste water up to the same level as would come out of a treatment plant,” said Michael R. Hoffmann, a professor of environmental science at the California Institute of Technology in Pasadena, who received $400,000 to develop this solar toilet. It uses the sun’s energy to power an electrode system in the waste water; the electrodes drive a series of cleansing chemical reactions, converting organic waste in the water into carbon dioxide and producing hydrogen that can be stored in a fuel cell for night operation.
The cost of each unit, which can be used up to 500 times a day, may initially be as high as $5,000 for a prototype but would drop with commercial production. Operational costs will be only a few cents a day, Dr. Hoffmann said.
Dr. Rijsberman said chemical engineering might provide the route to inventing many future toilets. Rather than composting waste for six months, as many waterless composting toilets do, the new versions could heat the waste quickly, killing pathogens, he said.
One of the funded projects taking this approach is a design for waste disposal at community bathrooms in South Africa, said Katherine Foxon, a member of the team that is working on the technology. Dr. Foxon is a chemical engineer and senior lecturer at theUniversity of KwaZulu-Natal in Durban. “We’ll process the waste chemically, combusting the feces and using that energy to drive the evaporation of urine,” she said.
Even in countries with extensive sewer systems, researchers are testing toilets that still flush but will divert urine before it gets into the sewer.
“Most nutrients from human metabolism are excreted in urine and must be degraded at treatment plants,” said Tove A. Larsen, a senior scientist at the Swiss Federal Institute of Aquatic Science and Technology, or Eawag, in Dübendorf.
Dealing with urine separately, by siphoning it off to local storage tanks, simplifies waste water management. The urine can then be collected, treated and recycled as fertilizer. Dr. Larsen was a leader of a six-year project at Eawag on urine separation, known as No Mix technology.
The toilets at Eawag’s office buildings are No Mix models. Each has a built-in urinal at the front that drains into storage. The back compartment works like a conventional toilet as waste is flushed into the sewer.
The technology is in its infancy and has drawbacks, Dr. Larsen said. Children have difficulty aiming correctly between the compartments, for instance. And the toilets can cost twice as much as conventional models and require steady maintenance to prevent the build-up of pipe-clogging scale that is deposited by urine.
Dr. Larsen, who is also one of the Gates Foundation winners, will lead an interdisciplinary team in developing a nonflush toilet. It will have separate compartments for urine and feces, she said, along with a third compartment for water that is used to keep the toilet clean. After filtering, this water can be reused in the cleaning process.
Peter P. Rogers, a professor of environmental engineering at Harvard who has long researched water and energy resources, applauded the efforts of the foundation but said the problems that the competition is addressing are monumental.
“You need toilets that are inexpensive and can be used by more than two billion poor people,” he said. There are many potentially good solutions, he said, though, they have not yet been economically feasible.
“But it is worthwhile to pursue solutions,” he said. “Life would be so much better for a lot of people.”
source: http://www.nytimes.com/2011/08/14/business/toilet-technology-rethought-in-a-gates-foundation-contest.html?module=Search&mabReward=relbias%3Ar%2C{%222%22%3A%22RI%3A13%22}
by Anne Eisenberg 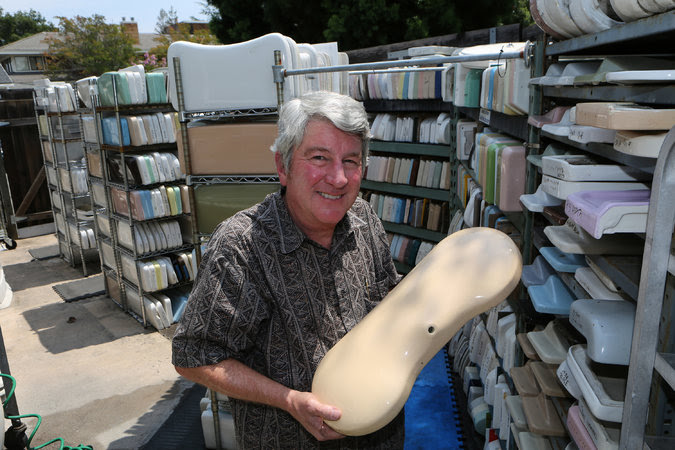 Gary Tjader, owner of This Old Toilet, with a kidney-shaped tank lid from the 1920s. He has about 2,000 lids in stock.CreditJim Wilson/The New York Times

Vintage Toilet Parts Are the Basis of Thriving Online Businesses

Posted by This Old Toilet at 8:00 AM No comments:

~ If your toilet tank lid has broken or chipped edges, take a fine file and carefully smooth down the sharp edges. Or remove the lid and do not use it.

~ Secure toilet tank lids in public or institutional environments with silicone. Apply clear silicone caulking between the bottom of tank lid and the face of the tank. When access to the inside of the tank is required, cut the silicone with a razor or knife.

~ If you have a five year old living with you, show them what's inside the toilet tank before they try to look on their own. Yup - sold another lid today to replace one broken by a curious toddler
.
~ If your toilet seat won't hold in the up position, try these two remedies: Gently slide the toilet tank lid back on the tank as far as it will go and/or loosen the toilet seat mounting nuts and move the seat as far forward as it will go...retighten nuts.