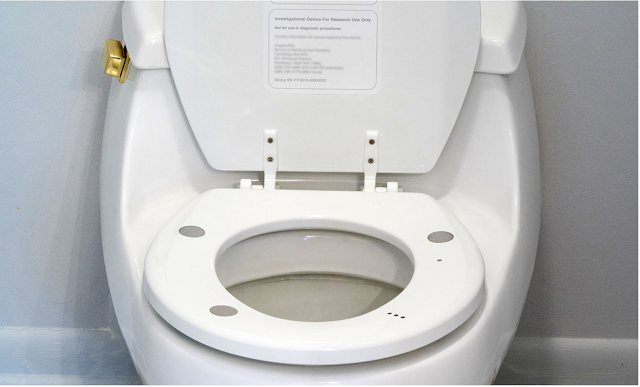 Time and again, studies show that people are not good at consistently taking medication, following health care plans, or regularly recording health information, even when our doctor tells us to.
And that’s a big problem in health care. In fact, the World Health Organization says that getting people to adhere to medical interventions could have a greater impact on world health than any specific medical treatment.
Now, a team at the Rochester Institute of Technology (RIT) in New York has come up with a clever way to get patients with heart failure to track their heart health—let a toilet do it for them.
Sensors in a new battery-powered, cloud-connected toilet seat track blood pressure, blood oxygen levels, and other heart data as accurately as hospital-grade monitoring equipment in a small group of patients, according to a study in the January issue of the journal JMIR mHealth and uHealth.
The idea of a “smart toilet” isn’t new—Google has a patent on a health-tracking toilet and Japanese manufacturers Toto and Matsushita (now part of Panasonic) have each developed Wi-Fi–connected toilets—but most health-related toilet technologies focus on urine and stool analysis inside the bowl, rather than tracking vital signs using sensors in the seat.
Regular visits to the RIT-developed seat—which involve no more time or effort than a usual trip to the commode—could indicate if a patient’s heart health is worsening and they need to see a doctor, though that claim will need to be tested in a clinical trial. If the monitoring system works as expected, the device could help catch early signs of heart decline and decrease the number of hospitalizations for heart patients.
The only current FDA-approved heart failure monitor, the CardioMEMs HF System, involves implantation of a small pressure sensor into an artery near the heart and requires a patient to lie down on a bedlike electronics unit once per day to capture data.
“We wanted something that can work for everybody, without any change in behavior or habit required,” says toilet seat study coauthor Nicholas Conn, a postdoctoral researcher at RIT.


The smart seat, developed by Conn and RIT engineer David Borkholder, is waterproof, can be cleaned with any traditional household cleaner, and wirelessly communicates health data directly to the cloud.
The seat includes three key sensors: an electrocardiogram to measure electrical activity of the heart; a photoplethysmogram (say that three times fast) to measure blood oxygen levels; and a ballistocardiogram. The ballistocardiogram was actually developed in the late 1930s to measure the mechanical force of the heart pumping blood—literally tracking the recoil of the body from the sudden ejection of blood from the heart into the aorta. Ballistocardiography lost favor when echocardiograms were developed, as it was easier and more accurate to take an ultrasound of the heart than measure tiny changes in body movement.
But today, with more advanced instruments to measure that force of blood ejecting from the heart, ballistocardiography has found new popularity. For Conn and Borkholder, it was a perfect way to measure the volume of blood pumped from the heart with each beat, called stroke volume, in a person sitting down.
To test their seat, the team gathered blood pressure and blood oxygenation measurements from 18 volunteers in a laboratory who were instructed to sit on the seat but not urinate, defecate, or talk. Urination and defecation can shift readings since they put minor stress on the body, says Conn. While the system currently operates with algorithms that analyze signal quality, in the future Conn also plans to incorporate algorithms to identify and reject those inevitable bathroom moments from the data set.
But even if a person is fidgety on the toilet and the system fails to record a clean signal, there is always the next time. “If you’re not going to pick it up in the morning, you might pick it up at night. People are going to continuously use this seat,” says Conn.
They also analyzed the stroke volume measurements, a key indicator of heart health, from 38 healthy volunteers and 111 heart patients at the University of Rochester Medical Center. Ultimately, the toilet seat estimates of all three heart measurements were as good as their respective gold standards taken with hospital-grade monitoring equipment, the researchers found.
Last summer, Conn founded a company, Heart Health Intelligence, to commercialize the technology and hopes to partner with a device company to produce it. He is also currently working with MD Anderson Cancer Center, in Texas, to see if the seat can detect early signs of heart damage as a result of chemotherapy or radiation therapy in cancer patients.
source: https://spectrum.ieee.org/the-human-os/biomedical/devices/monitoring-heart-health-one-toilet-seat-at-a-time
by Megan Scudellari