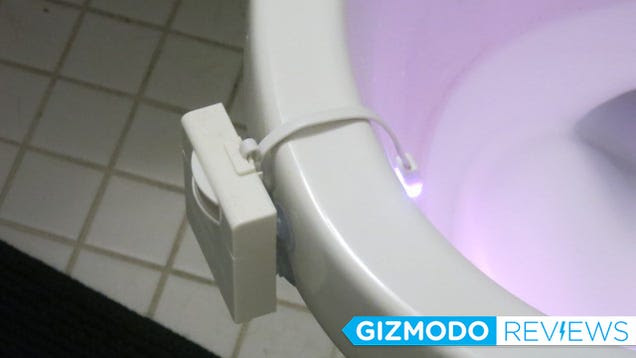 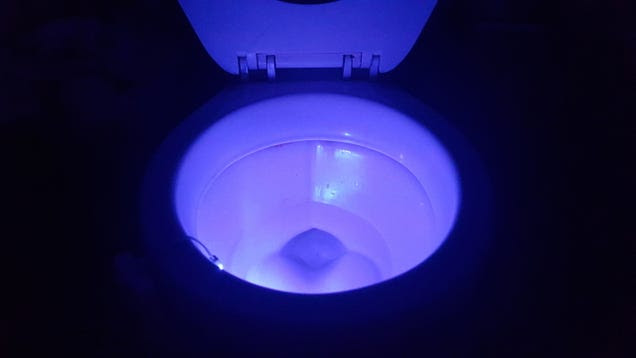 Post-Kickstarter success, the creators of the Illumibowl spent nearly a year developing this finely China-manufactured plastic gadget, and I often despaired of ever receiving mine due to all the problems they encountered along the way. But this summer, lo and behold, my fellow backers and I were finally sent the finished product.
My verdict? This is the best $15 ever spent on a silly bathroom gadget, Kickstarter or otherwise. 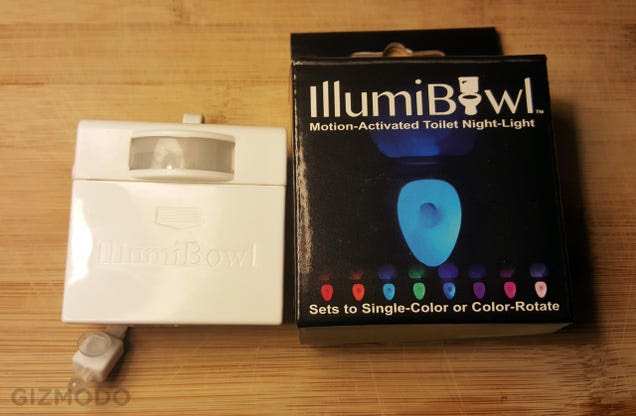 The Illumibowl comes in a box half the size of a deck of cards. I received three to use, review, and give to friends. It’s a remarkably simple design—basically just a small white plastic box with a battery compartment (3 AAA batteries not included), a rounded motion detector, and some suction cups around back.
The left side of the plastic housing has one small, clickable button which lets you select which color you want. Until you press it, the Illumibowl will cycle through eight different colors. They’re beautiful and magnificently weird to watch. 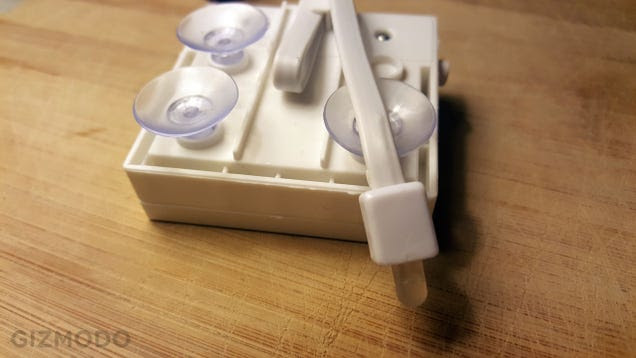 The fancy color-changing light is a 5mm LED capable of lasting 100,000 hours of use, theoretically offering years of mild entertainment. It’s attached to the top of the device by a flat, flexible cable that has roughly 2-3” of slack. This allows you to wrap the cord over the top of your toilet bowl. In addition, there’s a plastic clip to hold any additional cable length you don’t want.
The Illumibowl easily sticks to your porcelain throne thanks to four tiny suction cups on the back of the plastic housing. On the end of the LED cord, another suction cup can be found for placement inside the rim of your toilet. Gross? Indeed—so don’t forget to clean first. 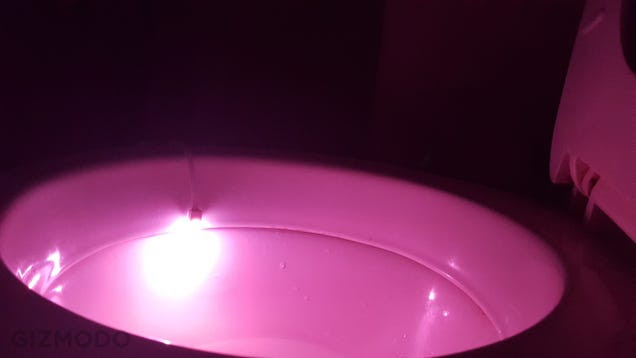 Step 1. For a proper Illumibowl test, I suggest staggering into your bathroom at 3 am during a house party feeling approximately twice as bad as after your last wedding reception. For best results, quickly collapse to your knees. If this doesn’t trigger the motion sensor, I’m not sure what will. Use the newfound light to find the toilet bowl.
Step 2: Straddling your porcelain totem, watch and wait until the Illumibowl light switches to bright green, a color so neon it resembles toxic waste. By now, The Weeknd’s summer hit Can’t Feel My Face should be playing in the background.
Step 3: Expel the tempest in your stomach and enjoy the calming (yet eerie) mood lighting and ambient party noise, all while you relive your regretful moments from the past six hours.
Step 4: Flush and pass out. Illumibowl’s potty aurora borealis will shut off by itself. 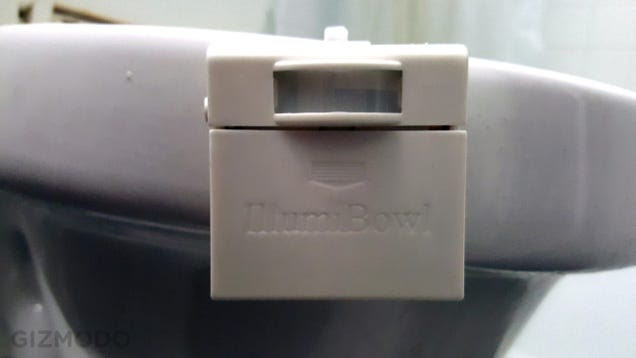 Joking aside, this product does pretty much exactly what I wanted it to do. It guides me to a toilet without blinding me in the middle of the night. It gives everyone mild amusement during the most basic of human bodily functions. And, as you can see in my demonstration below (it’s water, people), it also helps you aim.

As you might expect, there are a few glitches. Of the three models I received, one had molded plastic blocking the clickable button, which required some screwdriver whittling to solve. And after I set the Illumibowl to my favorite color—teal—I had to wait an entire motion-sensor-refresh to get the colors to cycle once more.
Minor inconveniences like these are a small price to pay for the promise of disco toilet nightlight for years to come.
source: http://reviews.gizmodo.com/illumibowl-is-the-toilet-nightlight-we-all-hoped-it-wou-1727756807
by Erik Hyrkas

http://www.thisoldtoilet.com
Posted by This Old Toilet at 7:00 AM