U.S. researchers have developed a toilet that could help transform the sanitation and waste industry.
Designed by a team at the University of Colorado Boulder, the Sol-Char toilet uses concentrated solar energy to transform human waste into useful and sellable end products such as solid fuel, fertilizer and heat.
The toilet operates off grid without piped water or sewage. The team received funding from the Bill and Melinda Gates Foundation's "Reinvent the Toilet Challenge."
"This is really trying to address the issue of management of faecal sludge," Karl Linden, Sol-Char Sanitation's principal investigator told CNBC in a phone interview. 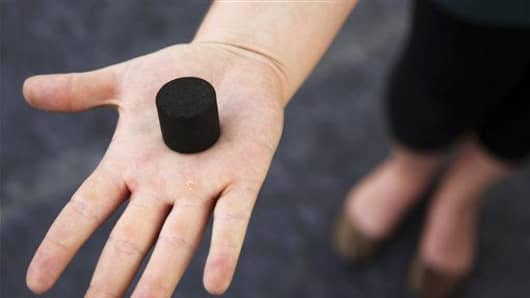 Sol-Char Sanitation
"The idea would be if we could treat the waste on site, in real time and make it safe to handle, then that would be a great step for the protection of public health in many of these areas," he added.
Linden, who is also a professor of environmental engineering at the University of Colorado Boulder, said that in many communities around the world, the practice of maintaining and emptying toilet latrines and pits was unsanitary and unsafe.
The World Banks says on average, poor sanitation costs countries 1.5 percent of gross domestic product (GDP); in India, for example, it costs $54 billion a year. Furthermore, 2.4 billion people across the planet, "do not have access to basic sanitation," according to the World Health Organisation.
The prototype toilet designed by Linden and his team is suitable for a family of four. Parabolic dishes are used to harness the sunlight on what Sol-Char describe as a "small focal point."
Fiber optic cables transmit this light to a "reaction chamber" where faecal matter is turned into usable by-products. Urine, once treated, can also be used as a fertilizer.
"From four to six people it's actually not that much that comes out – it might be one hundred grams, a few hundred grams, that come out of that, but as you collect it over time you can create value," Linden said.


"You could either use that in agriculture and it's good for improving the water holding capacity of soils; it's good for nutrient availability… and creates good soil structure," he added.
Solar power is an increasingly important part of the global energy mix and last year the International Energy Agency said the sun could be the world's largest source of electricity by 2050.
"Solar is an ideal energy source… there's really a renaissance in solar energy today," Linden said. "The way we can collect it is very efficient and it's a free energy source," he added.
Linden did admit however that using solar power presented own challenges. "It's certainly not going to be a solution for areas that have high cloud cover and a long, long rainy season," he said.
"We've done some analysis looking at patterns of light coverage in different parts of the world and we've come up with a map of where our toilet could work well… North Africa, the Middle East, parts of India, some parts in the Arctic, say, where there's a lot of sunlight."
Linden said that it would cost a family of four around $12,000 to buy a first-generation toilet, and said that Sol-Char Sanitation's main goal was driving that cost down. It is hoped that a range of factors – from scaling up production to using different manufacturing methods and more affordable materials – will help to do just that.

http://www.thisoldtoilet.com
Posted by This Old Toilet at 7:30 AM