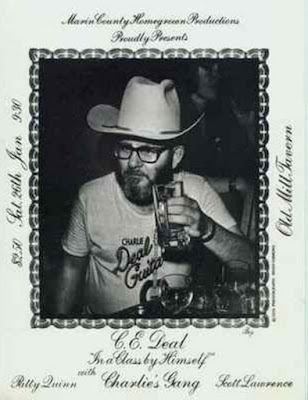 Charlie Deal, a beloved character in Mill Valley who was renowned as the inventor of the toilet seat guitar, died Monday at Marin General Hospital. He was 72.
Marty Balin of the Jefferson Airplane was one of the first rock stars to buy one of Mr. Deal's toilet seat guitars. Craig Chaquico, lead guitarist for the Jefferson Starship, and Hot Tuna's Jorma Kaukonen, were also Deal guitar owners.
The most famous of Mr. Deal's guitars can be seen on the cover of the Huey Lewis and the News album, "Sports," a platinum record whose cover photo was shot at Mill Valley's 2 A.M. club. The toilet seat guitar is on the wall of the bar behind the band.
Known as the unofficial mayor of Mill Valley, Mr. Deal was a familiar figure in town, riding his bicycle around, often with a toilet seat around his neck, the makings of a new instrument.
"To me, Charlie Deal was a symbol of what Mill Valley used to be," said John Goddard, owner of the recently closed Village Music. "He was a symbol of the charm, the eccentricity, the idiosyncrasy that this town used to have. To me, Charlie's passing is almost more of a blow to what Mill Valley used to be than Sweetwater or Village Music."
Born in 1935, Mr. Deal, who worked as a janitor and handyman, moved to Mill Valley from his native Moose Lake, Minn., in 1957, when he was 21.
"Charlie symbolized what I used to love about Mill Valley: that someone like him could live and thrive in a town like this, in a county like this," Goddard said. "He was really special."
In 1968, during the psychedelic era that produced the San Francisco sound, Mr. Deal was playing in his Charlie's Gang band when he had a flash of inspiration that resulted in his first toilet seat guitar.
"I realized I was sitting on a great musical idea," he liked to say.
In another version of the story, he said he auditioned for a band and was rebuffed with the rebuke that he was "the crappiest guitar player they'd ever heard." Thus the toilet seat guitar was born.
He got a patent for his invention in 1969. Saying he made "a serious guitar with a sense of humor," he named his custom models the Royal Flush and the Straight Flush. His called his four-string basses Four Flushers. All his guitars were decorated with outhouse-style crescent moons.
"He always had a ready smile for everyone and a joke, usually a bad one," remembered musician Austin deLone, who wrote and recorded a song called "The Legend of Charlie Deal."
Bob Brown, owner of Rancho Nicasio and manager of Huey Lewis and the News, said that when "Huey hit the big time, Charlie was one of those guys who was genuinely excited that something good had happened." He added with a laugh: "When I commissioned him to make me one of his guitars, he told me, 'I've ordered a special seat just for you, Bob.'"
Mr. Deal was treated with reverence in Mill Valley.
"He came in virtually every night," recalled Sweetwater general manager John "J.B." Baracco. "It didn't matter how crowded it was or what kind of music was playing, he somehow found his way to the front of the stage and would always dance there with the girls. When you talk about Mill Valley, he was the soul of the town."
Mr. Deal was honored with a papier mach replica of him on a float in a recent Mill Valley Memorial Day parade. Mama's Royal Cafe named a sandwich after him, Charlie's Deal, and has two of his guitars on display.
"He was an institution in Mill Valley," deLone said. "Like Sweetwater and Village Music, he was part of an era that's gone by."

http://www.thisoldtoilet.com
Posted by This Old Toilet at 7:00 AM